In her neat home nestling in a quiet suburban street, mum Anne Singleton peers out from her cottage-style windows.

Her Audi sits in the driveway and beyond it she sees a neat row of cedar trees leading to a church in an open field. 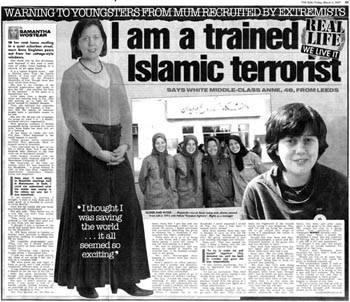 It is a typical English scene . . . and a lifetime away from the hostile deserts of Iraq and the military training camps of the People’s Mujahidin of Iran. Though Anne also once called these home.

Little more than a decade ago, Anne was learning how to fire rifles and gearing up to fight for the group backed by Saddam Hussein.

Then, she believed her comrades were fighting for freedom in Iran ” and that the deaths of innocent people were a justifiable means to an end.

But now the 48-year-old recognises the group for what it is ” a deadly, extremist terrorist organisation.

With growing numbers of British youngsters being recruited into terror cells, Anne hopes her story will act as a warning.

At her home in Leeds, she tells The Sun: “What happened to me could happen to anyone.

“These groups entice concerned activists then persuade them to commit terrorist atrocities.

“They convinced me to give up my life to follow them. Now I see their methods were identical to the ones cults use to brainwash people.”

Anne became involved with the extremists while studying English at Manchester University in 1979.

Her boyfriend at the time, an Iranian called Ali, was interested in the Mujahidin” a group formed in 1965 to free Iran from â€œcapitalism, imperialism, reactionary Islamic forces and despotism”.

Anne says:” I went along to Mujahidin meetings held in Manchester. In truth, I could not understand what the leader was saying in the videos we saw but I was transfixed.

“It all seemed so exciting. I thought, “I want to help them and do some good” so I decided to convert to being Muslim.”

Anne did not realise she was being psychologically manipulated.

She says now: â€œThey flatter you in a way that you don’t even realise they are doing it.

“They really put themselves on a pedestal so that when they want you to join them, you feel special.

“I thought I was a saviour of the world and would have done anything for the Mujahidin.”

In 1989 Anne moved to London to become more involved in Mujahidin activities, working in computing and PR for them.

The computer programmer says: “They told me I should dedicate myself totally to them and that they needed me.

“The following year, during a hunger strike, I succumbed fully.

“I took two weeks off work and by day three of not eating I felt like I was on a complete high.

“We were given tea and sugar to keep us going and I had entered a completely different state of mind.

“I was adamant that this was what I should do for the rest of my life.”

Anne has since discovered that hunger and sleep deprivation are classic cult recruiting techniques.

She says: “I didn’t question anything. I was shown a film of a female suicide bomber blowing up an ayatollah in Iran. It was horrific and very shocking at first.

“But they showed me the film so many times that I got less and less distressed. Eventually I didn’t bat an eyelid. Of course, I heard politicians and journalists describing the group as extreme but I dismissed it and assumed they didn’t understand.

“There were 30 or 40 of us living in a safe house and I was the only white person. I never left unless it was for fund-raising or a demo.

“We had no possessions and any money we earned or benefits we received had to be handed straight over to the group.

“We were discouraged from keeping in contact with any family or friends.”

Anne’s parents, an office administrator and a painter and decorator, insisted she gave them her address and they wrote to her regularly, but letters were often confiscated.

In 1992 Anne was asked to go to the Iraqi desert for military training.

She says: “I loved the camp. It felt liberating to obey orders because then you lose all responsibility for yourself. I had a uniform, did assault courses, learned how to drive trucks and did firearms training.

“When I signed up to the Mujahidin I never imagined I would do that, but once I was there it seemed totally normal.”

After three months Anne was sent to Sweden to carry on with the PR work. But she became depressed after the group introduced a new rule banning marriages and families.

Anne says: “That rule seemed too final. I knew a family was the one other thing I wanted from life.

“To try to make me pull myself together they demoted me, sent me back to London and gave me less responsibility.

“It was reverse psychology, but I was so depressed that even that didn’t work.

“I’d lost all motivation. They tried to make me feel guilty, saying I was letting them and God down.

“By 1993 I knew I wanted to distance myself from the group so I began to work part-time again as a college administrator.”

Anne was finally ready to leave ” but the Mujahidin wouldn’t let her go easily. She says: â€œThey tried to make me frightened of the outside world, saying it was dangerous. They said I’d end up living an immoral life or get sucked into drugs or crime if I abandoned the values of the Mujahidin.”

Around this time Anne met Massoud Khodabandeh, a senior and disillusioned member of the group who had also decided to leave.

They went their separate ways but met again and married in 1997. Three years later they had a son.

Anne says: “We are both Muslim but after we left the Mujahidin we would go out and get drunk just to be “normal”. Being able to think for yourself was amazing.

“We were like little kids doing things like going to the supermarket and choosing our own food. We discussed what we’d been through and I had no doubt we were psychologically manipulated. We’re fortunate we have each other to lean on.”

Anne feels it is only since the birth of son Babak, now six, that she truly feels like her old self.

“His birth made me pull myself together and we moved to Leeds shortly afterwards,” she says. “My family live there and after years apart it was great to be close again.”

The couple are now in a group called Iran Interlink, which campaigns AGAINST terrorist cells.

Anne says: “When I joined the Mujahidin I never had any intention of fighting. But by the end I thought it was OK to kill and assassinate.

â€œI thought it was right that people would die on suicide missions. I’m appalled at that now.

“France and Germany have ministers for cults and I think we need the same here.

“People are free to do what they like virtually until they reach the point of blowing someone up.

“The Government needs to look at terrorism from the angle of recruitment. People have a civilian mind where they know it is wrong to fire a gun and hurt someone. You have to be trained to kill and that is what’s happening in these groups.

“Psychological manipulation can happen to anyone at any time.

“If you’re lucky, you end up with a timeshare. If you’re unlucky you end up blowing yourself and innocent people up on the Tube.”