As expected, the so-called Iran Free Summit of the Mujahedin Khalq Organization was followed by a wave of critics from various Western individuals, from Socialist Democrats of the EU to American journalists and scholars who were mad at the presence of some of their political figures in the MEK gathering.
However, critics against the paid speakers of the MEK event came also from Iranians inside and outside Iran. Certain figures from opposition groups against the Iranian government also declared their disapproval against the MEK as a terrorist cult-like group. Erfan Fard is an example of these figures.

Following the MEK online gathering, centered in Camp Ashraf 3 in Albania, Fard, the Iranian researcher and analyst who is an unforgiving critic of the Islamic Republic government tweeted:
“Dramatically, these Democrats Senator Menendez, Cory Booker and Republicans Roy Blunt and Senator Ted Cruz, as well Mike Pompeo have no knowledge about a notorious Islamic Terrorist Group of #MEK.”

Publishing photos of newspaper –in which the news of the assassination of the American military advisors and businessmen who were killed by the MEK in Iran during the 1970s, was available—he wrote:
“Hawkins, Shaffer & Turner were American colonels. Heavy check mark you spoke for terrorists, sir!” 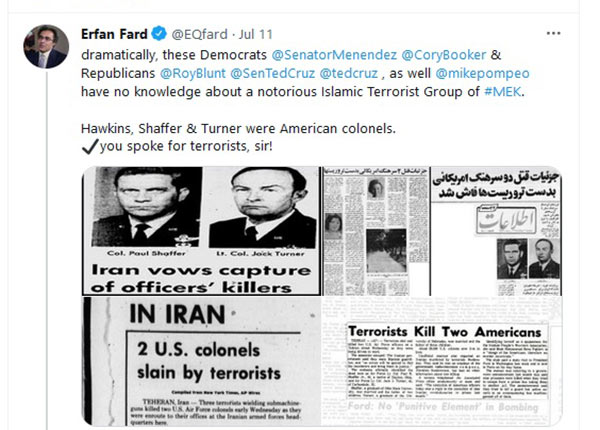 Fard also criticized politicians from Department of Homeland Security for promoting the MEK terrorists:
“Strangely, some uneducated thugs in @DHSgov endorsed the articles of #MEK and these criminal individuals inside the soil of The USA! and they censored any any objections. shamelessly, now, some of them play trumpet for #terrorist loving mullahs who activated the dark cells in the US!”

He added:
“by a quirk of history, @DHSgov and @ICEgov postulated a sham pejorative article of this quisling Terrorist group in the court @TheJusticeDept against 1 Iranian researcher! Quizzically & sorrowfully nobody cares about the sophistry of MEK’s members in dark corners of net!”