Hanif Aziz, 40, a Swedish police officer and the son of Mujahed parents published his autobiography on the early 2021 in Swedish language. The book was soon published on Google Play eBooks and Amazon and other online stores for $9.99. While the propaganda media of the Mujahedin Khalq (MEK) claims that the book has been written by the Iranian Intelligence (!) the world’s largest community of book lovers, Good Reads, has introduced the book. In this database, there are also eleven reviews on the book of which two are in English. The MEK-run media claim that the Iranian intelligence is abusing Swedish Police personnel! Their proof for such a claim is that, as a child, Hanif had not been interested in writing books and politics. 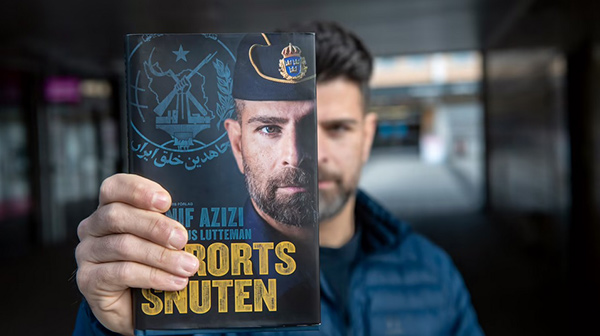 The Swedish title of the book is “Förortssnuten” which has been translated to English as “Suburban snout”. These unbiased reviews on the book clarify that Hanif Azizi’s book is not a book on politics. Google Reads states:
Hanif Azizi grew up on a military base in the Iraqi desert. His parents are warriors for the Iranian rebel movement Mujahedin of the People and the fight against Khomeini permeates his entire life. After his father is killed in the war, nine-year-old Hanif takes his little brother by the hand and begins an escape that eventually takes him to Sweden. He has a hard time adjusting to the new country and in his teens he gets in touch with the terrorist-branded rebel movement again. Attracted by fellowship and a possible reunion with his mother, he goes to Iraq to become a warrior in the People’s Mujahedin.

The story could have ended here, but something happens that makes life turn around. Instead, Hanif returns to Sweden – and trains as a police officer.
He is looking for a job in Rinkeby, and will soon be involved in things he never thought could happen in Sweden.
Suburban Snot is a reality-based story about escape, exclusion, radicalization and life in Swedish areas of exclusion. It is a story about friendship, cohesion and about a police force that is faced with a brutality it cannot handle.

Ksena a user on Good Reads rated the book “really liked it” and wrote:
Recommends it for: Anyone!

Shelves: painful, lovely, dramatic, biographical, nonfiction-facts, read-for-work, important, favorites
This was… a really good book. And an important one. AND! Much more than I first had anticipated.
I expected a story about a Swedish cop being a refugee originally or from such a family, and working in a Vulnerable area. And I do get that. But not only.
He grew up his first 9 years in the organization Peoples Mujahedin of Iran. But was then sent away to an uncertain future with alone. Just him and his little brother. 9 and 6 years old.
It’s interesting how he has written this book about his life. Every other chapter is about his life as a cop. And every other chapter is about how he grew up and survived just him and his little brother with various adults around them, both good and bad.
It’s both tragic and inspiring. Especially when he does finally meet his mother again as a young adult and almost joins the Mujahedin organization… It makes it so clear how young men so easily can be so easily manipulated to join extremist organizations.
Now he didn’t, he grew up mentally, returned to Sweden and ended up being a cop through various roads of life. And works in areas in Sweden where crime-rates are high and honor culture are way to common. And he is using his past to help as much he can.
It’s an inspiring story. It would have been cool to meet this man, and especially to have the teens and kids in the school I work in. I think it would have done them good.
I’m glad to have read this book. Even though the language was a bit weak here and there (hence not max-rating), over all it was an amazing story!

Another user Katerina Dashti rated it “liked it” and wrote:
“He is not welcome here (Han är inte välkommen hit). ”
This book happened to be on my to-read list due to several reasons. First, it has been much discussed in Swedish social median and book societies. Second, this is the topic that is very important for my new Swedish family and it was very interesting to read other people view about it.
This is a story of Iranian boy, who grow up in a military base in the Iraqi desert where his parents joined the Iranian rebel movement in the fight against political regim in Iran. After death of his father, Hanif and his brother start their journey for a better life that eventually takes them both to Sweden. This is a story about difficulties to adjust to the new country and how different situation can be experienced by two brothers. The story has a twist and instead of leaving for Iraq to reunion with his mother and join the People of Mujahedin, he decides to become a police officer in Sweden and work in one of the problematic areas in Rinkeby.

The story is presented in two parts. On the one hand, it is a story of a little boy who goes through really tough moments that undoubtably affected his life and views. On the other hand, it is a story of a police officer working in one of the most criminal areas in Sweden and facing loads of brutality that is hard to handle.
This is announced to be a reality-based story about escape, exclusion, radicalization and life in Sweden. Yet it turned to be more a one-sided story, that perhaps is a part of author’s getting well and accepting himself process. The part of the police officer story was really interesting as it focused on emotional aspects and challenges and possible ways (or lack of them) to deal with them. In addition, it was interesting to read about some tragical events in Sweden from the insider perspective. The biographic part of the growing up boy and information presented raised numerous questions. Thus, I would recommend to see the book more as a fiction story with some connections to the reality than as the reality based one. In other words, this book is a great example case where one should read consciously and remember about the danger of a single story.
Book is in Swedish and translation in English is not available. The language is easy and advanced language skills are not required.