A round table discussion centred on the issue of terrorism in Iraq and possible solutions to this problem. The Symposium was divided in to 3 parts: – the general threat posed by terrorist groups and the ways they operate in Iraq – foreign terrorist organisations in Iraq – the creation of terrorist organisations in Iraq and the global supporters of these terrorist groups Participants of the Symposium ranged from university professors including, Dr. Aziz Jabar Shayal, Dr. Samir Alshweely and Dr. Rasheed Saleh, professors of Political Studies from the University of Baghdad. The Symposium was also attended by many governmental and non-governmental representatives from a wide range of ministries and NGOs, including representatives from Iraq’s Ministries of Defence, Human Rights and Security. 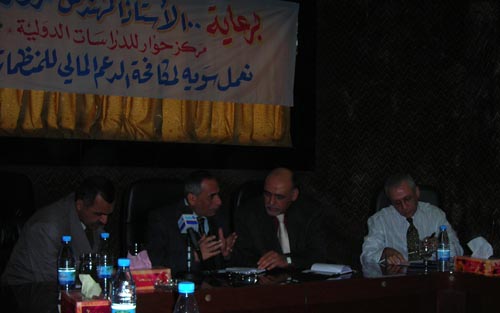 Massoud Khodabandeh from the Centre de recherches sur le terrorisme depuis le 11 septembre 2001 (Paris), who was in Baghdad for meetings concerning the fate of the remaining individuals following dismantlement of Camp Ashraf which houses the disarmed Iranian terrorist organisation Mojahedin Khalq Organisation, was invited to participate in the discussion.

The Symposium ended with a full report on the issues discussed and Dr. Aziz Jabar Shayal delivered the end resolution in which one paragraph emphasized the necessity for the dismantlement and deportation of the foreign terrorist Mojahedin Khalq organisation and encouragement and facilitation by the government and others to help the remaining individuals find a safe palace outside Iraq and return to normal life.

The symposium was covered by media representatives who reported from the meeting room.

In the interview, Massoud Khodabandeh emphasised above all the right of the Iraqi people to enjoy security and have justice served against the perpetrators of violent acts in their country, in particular the criminal heads of the terrorist Mojahedin-e Khalq organisation which was involved in the massacre of the Kurdish and Shiite uprisings against Saddam Hussein in March 1991. Mr Khodabandeh said that in his belief and according to all the studies of the Centre de Recherches sur le Terrorisme, the phenomenon of terrorism cannot have a single solution and needs inter governmental cooperation as well as the involvement of NGOs to protect the human rights of the who have been inveigled by terrorist leaders into this path, and to give them a second chance of integration back into their societies.

Thanking the organisers of the Symposium Mr Khodabandeh emphasised the cult culture of terrorist organisations and the methods they use to brainwash their followers. He also gave examples of foreign support by some influential groups and parties who facilitate the flow of finance for terrorism. Not the least the relationship between the remainders of Saddam Hussein in Iraq, London, Washington and other countries with the Mojahedin Khalq Organisation, and the way this relationship is becoming clear in the escalation of violence in Diyali province as well as the streets of London and other European countries.

The Symposium lasted for over two hours. Afterwards the participants formed smaller groups to further discuss the variety of issues raised by the Seminar.

A full report and media coverage will be published shortly.