With the growth of globalization and immigration, it has become clear that modern forms of slavery are growing in the world. The definition of slavery, 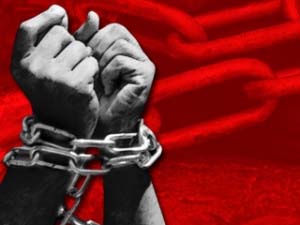 according to Joseph Rowntree Foundation includes three principal elements of the exploitive relationship:

– Lack of a human rights framework

– Control of one person over another by the prospect or reality of violence.

There are more than 27 million slaves in the world more than the number of people extracted from Africa throughout the 400 years of the slave trade.

The very important factor that makes a difference between poor working condition and slavery is that the enslaved person has no real alternative but to submit to the abusive relationship.

The withdrawal of passports or ID documents, deceit and abuse of power, the use of physical and psychological pressure are the functions of all abusive slavery structures. The crucial point is that anyone who do protest against such conditions may be beaten, abused, raped, deported, tortured or even killed. These attacks can result in serious physical and psychological trauma.

All the above-mentioned criteria of modern slavery are perfectly functioned by Mujahedin Khalq terrorist cult. Unfortunately slavery is a problem people think we solved long ago but in fact, it’s still alive. It has simply taken a new form.  People in Auvers-sur-Oise in a Parisian suburb are living next door to slaves without knowing it. The MKO members in Camp Maryam, France and Camp Ashraf, Iraq, are suffering the same poor conditions of the enslaved captives. These victims who are kept in a strange land can grow dependent on their captors, if only to survive. The leaders of MKO cult use a range of crimes-fraud, coercion, physical and psychological violence to hold their victims captive. They confiscate passports and during Saddam Hussein’s leadership threatened to turn their captives over to the Iraqi authorities if they refused to obey. Even if victims can escape, they often fear leaving because they are not able to deal with local difficulties. But since the American invasion to Iraq in 2003 and the disarmament of MKO by the US army, the victims found an opportunity to leave the cult. More than 600 have left Camp Ashraf so far. The 3300 members remaining in Ashraf and others who are residing in Auvers-sur-Oise are still victims of serious human rights violations. A broad-based awareness campaign should be launched to improve the supervision of Human Rights Organizations to strengthen protections for the modern slaves captured by the cult of Rajavi. Our former comrades who are victims of modern slavery need urgent help. We can make a tangible contribution to change their condition. The international community should get involved in liberating all slaves around the world especially those who are suffering the poor condition of living in cult of personality under the rule of the dictatorship of the Rajavis.