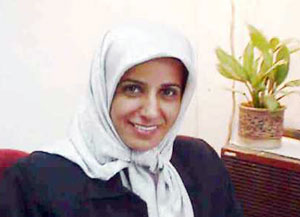 As I mentioned in “Part 6” there is a practice within MKO’s internal relations called “nil-nil” (a cult type jargon) wherein everyday the members are supposed to allegedly demoralize themselves because they say that anyone who demoralizes himself and releases his energies will reach higher degrees. So they order the members to criticize each other daily and then listen to the others criticizing them. This is called “nil-nil” “criticizing others and being criticized".
There is another internal phenomenon called “Current Operation” (another jargon). This has been practiced in MKO cult since 1994. At the beginning it was oral. I mean that the members moved forward and spoke; but later it became written. In this way the member had to write anything he or she wanted to say and then read it inside the group. Masud Rajavi made too much noise calling the current operation as “Spiritual Jihad” as and even “higher than martyrdom”. Therefore, the members must confess all the sins they commit and they should expect any reaction from their colleagues.
For example, the member who attends the “Current Operation”, reads his confessions saying “Today I saw something precious on my superior’s desk and I took it” or “when I saw my superior this morning I suddenly imagined that she really looks like a torturer” or “when today I was supposed to work from 8 to 12, I just worked until 9 and then I went to the dorm and relaxed.” While the member is reading the facts, the others in the group insult him or her with an abusive language using terms like lumpish, idiot, . . . and punishing him or her orally and put the blames on him or her like “how do you want to liberate Iran while you don’t do your duties just right” 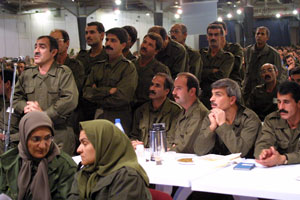 The “Current Operation” includes a stage called “cleansing” (jargon) that for the women in the leadership council should be practiced every moment and for the rest of women it is daily and for the men it is weekly. In these meetings the members must confess their sexual problems or thoughts. For Leadership Council the instruction was that if a female sees a male recalling her fiancé, she would have to confess her thoughts instantly and do the so-called “nil-nil” practice.
For ordinary female members this has to be practiced at the end of each day. For male members, the cleansing meeting is done every week on Fridays. They didn’t want to open up the relations between male and female members so the weekly meetings of men were held only by men (all meetings are generally held by women). As I noted in the previous session, there are some male members who are considered as the pins (jargon) of the organization and their responsibility is to control the members of each section. Their duties include holding the weekly meetings for the men and dealing with the problems between the male members and their female superiors. So the brother who was the pin of the organization in that section holds the meetings.
The women’s meetings are held by a member of Leadership Council and the meetings for a Leadership Council’s member are held by high-ranking members of the Council. If a member of the Leadership Council has a contradiction in mind, she has to declare it and do the so-called “nil-nil” practice. Then if it is found out through the reports, that person will be encountered and taken under more control. In fact, they have a goal. For example, the member thinks “I wish I could do something” or he thinks “How that woman looks like my ex-fiancé”. These are the moments, the moments wherein the member thinks about the outside world. But if she liked a boy (a teenager) and in a moment she liked to kiss him, she has to confess it immediately, this is a functional fact and as soon as the report of this confession is on hand, the situation of the both sides changes. A lot of efforts, in the MKO, are spent for cases such as who you have relations with and who you like.
One of the levers of the organizational control in MKO is the joint movements of female members which I mentioned in the first part of my memoirs. They said:”we order you to move jointly for your own sake. But everybody knows that this claim is baseless. Everybody knows that it’s because everyone should watch the others don’t escape. They even force the most high-ranking officials to move jointly . They said that there shouldn’t be any exclusions, because exceptions in the regulations would discredit them.
Thus everyone have to obey the regulations and execute them in order to control the lower ranks.
Translated by Nejat Society