Iranian dissidents in Iraq. Where will they all go?

“IT WAS one of the strangest places I’d ever seen,” says one of the few Farsi-speaking Westerners to have spent weeks in Camp Ashraf, 65km (40 miles) 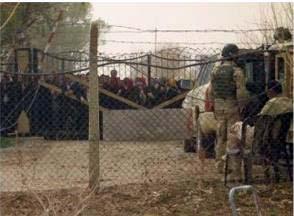 north-east of Baghdad, where some 3,400 Iranian dissidents are hunkered down and are now threatened with expulsion from Iraq, perhaps even back to Iran. It was “like a spiffy midsized town in Iran”, with parks, offices and buildings—but no children. It was “sterile, soulless and sad”. Nearly two decades ago, families living in the camp were “dissolved”, couples were forcibly divorced, and their children sent away, many of them to live with supporters living in the West, to be brought up in the faith of a movement widely described by independent observers as a cult.

For the past six years, the Americans have protected the camp, whose raison d’être is generally opposed by the surrounding Iraqi communities and by most Iranians, whether or not they are for or against the clerical regime in Tehran. But as American troops prepare to go home, the Iraqi government, which wants cosy ties with Iran, now says the camp must be closed and its inhabitants dispersed, probably back to Iran, where they would face an uncertain future, to put it mildly.

The group is variously known as the People’s Mujahedeen of Iran (PMOI) or the Mujahedeen-e Khalq Organisation (abbreviated as both MEK and MKO). Founded in 1965 as a youthful underground opposition to Iran’s Shah, it was usually described as “Islamic Marxist”. When the Shah fell it at first backed Ayatollah Khomeini but soon fell out with him, embarking on a campaign of violence and bombings which, on a single occasion, is reckoned to have killed 70 civilians, including several senior clerics; the withered arm of Iran’s current supreme leader, Ayatollah Ali Khamenei, was a result of that bomb. The group’s political umbrella is called the National Council of Resistance of Iran.

The PMOI’s leader, Massoud Rajavi, fled to France in 1981 but he and his followers, many of them women, relocated in 1986 to Iraq, where Saddam Hussein gave them a big base at Camp Ashraf, which is thought to be around 20km in circumference. Saddam abundantly supplied the PMOI with Brazilian and British tanks (captured from Iran during the war of 1980-1988) and Russian armoured personnel carriers, among other arms. In return, the PMOI made attacks on Iran itself, which is why Iranians of all stripes tend to regard the group as traitors. It is also said to have spearheaded Saddam’s attacks on rebellious Iraqi Kurds and Shias in 1991, after the first Gulf war, a charge it strongly denies.

No less controversially, the PMOI is widely reviled by human-rights groups for nurturing a messianic cult of personality around Mr Rajavi and his wife, Maryam, and for enforcing a totalitarian discipline on its adherents. Several defectors testify, in the words of one of them, to a “constant bombardment of indoctrination” and a requirement to submit utterly and unquestioningly to the cause. No sources of news are allowed without the PMOI’s say-so. According to one defector, around 50 members who rebelled were sent to Saddam’s prison in Abu Ghraib, west of Baghdad.

Members are completely cut off from contact with their families. When the above-mentioned Farsi-speaking Westerner, who visited Ashraf in 2004, enabled wavering group members to talk to their families in Iran by satellite telephone, some of their parents refused to believe it was their children, for they had been told by the PMOI that they were dead.

No one is sure whether Mr Rajavi is alive but most think not; he has not been heard of since the American invasion of 2003. His wife, known as “the president-elect”, travels the world, soliciting support from a wide range of sympathisers, including some in the American Congress, the European Parliament and the British House of Lords. No one is sure who really controls the PMOI in Camp Ashraf. It is thought that nearly 400 residents have voluntarily returned to Iran, where they are said to have been treated adequately so far. But who can really tell? Several hundred more are seeking refugee status elsewhere. A few dozen have—or rather had—passports to Western countries, some of which have verified their bona fides.

In the past year, the European Parliament and Britain’s courts have removed the label of “terrorist” from the PMOI, mainly on the ground that the group says it has disavowed violence, is not known to have carried out any acts of terror since, at the latest, 2002, and surrendered its weapons (at any rate, its heavier ones) at Camp Ashraf after the American invasion. This has irritated several national governments, especially the British and French ones, which think the PMOI is a nasty nuisance and its presence on their soil bad for relations with both Iraq and Iran.

The outfit is still officially deemed a terrorist organisation in the United States but has a fierce lobby there too, backed by a mix of neoconservatives and leftists, that accepts at face value the group’s insistence that it is a secular and democratic movement with mass support in Iran and a real chance of eventually displacing the mullahs’ regime. Its lobby in Europe is much exercised by recent statements of Muwafaq al-Rubaie, Iraq’s national security adviser, who makes it plain he wants the camp disbanded and its people sent abroad, mostly to Iran, whose rulers have become more vociferous in calling its fellow reigning Shias in Baghdad to send them back.

The PMOI has a sophisticated network of ardent supporters. Without a doubt, its voice of despairing outrage will rise to a squeal if the Americans give way to Iraqi and Iranian demands to cut the movement loose. But it may happen.