The dozens of middle-aged Iranians standing in six neat, gender-segregated rows stare straight ahead from behind the chain-link fence close to the

entrance of Camp Ashraf, some 40 miles north of Baghdad in Diyala near the Iranian border. "Ashraf is our home, Ashraf is our home," they robotically chant in Iranian-accented Arabic, as they jab their right fists into the air in unison.

Some of the women, who are all dressed in pantsuits with long jackets and colorful headscarves tied under the chin, carry placards in Persian. A bright 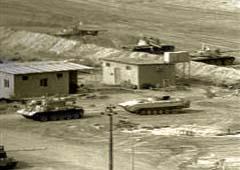 yellow banner shimmers in the mid-morning sun. "Ashraf is the city of peace," it says in Arabic.

Most of the time there’s nobody outside Camp Ashraf to hear the members of the Mujahedin-e Khalq (MEK), a fiercely anti-Tehran group who have been based here for the past two decades. That is, unless you count the Iraqi security forces who took over control of the perimeter of the 19-sq.-mile camp in February from U.S troops. The Americans had protected it since the 2003 invasion. But the Iraqi soldiers, like their government in Baghdad, don’t appear keen to listen to the chanting. The MEK should "understand that their days in Iraq are numbered," National Security Adviser Mowaffak al-Rubaie said recently. "We are literally counting them."

Saddam Hussein’s regime — no friend of the ayatollahs of Iran — welcomed the MEK in the mid-’80s, inviting them to set up a military camp and supplying them with hundreds of armored vehicles and other forms of support. Although in recent months Camp Ashraf’s residents have swapped their once-mandatory olive green military fatigues for civilian garb, both Iraq and the U.S State Department consider the MEK a terrorist group. In 2003, the U.S military disarmed Ashraf. (After a legal battle, the European Union removed the organization from its terrorist list in January; the United Kingdom did so in 2008).

The camp, which is more like a sprawling village with flower-filled parks and tree-lined avenues dotted with old-fashioned white lampposts, is home to 3,418 people, about a 1,000 of whom are dual citizens with non-Iranian travel documents issued by Western governments including the U.S, Canada, Australia, and the European Union. It has become an irritant to Baghdad’s increasingly close ties to Tehran. Iraq wants to close it, on the grounds that its residents are "terrorists" and "illegal foreigners." Still, deadlines for doing so have come and gone (the most recent was in late March). The stalemate continues: The MEK refuses to leave, and the Iraqi government has said it will not force them out.

"They want to physically purge everybody here," says Hossein Madani, an MEK spokesman and liaison to the Iraqi government. "There is an Iranian agenda that wants Ashraf residents out of Iraq." That may be, but government officials say the camp’s closure is also in Iraq’s national interest. "We do not want any friction with our neighbors," Rubaie says. The days when Iraq was used as a base to launch attacks against its neighbors, whether by the MEK along the eastern border with Iran, or by the Kurdish separatist PKK along the northern border with Turkey, are over, he says.

While the Iraqi government has made it clear it’s withdrawing the welcome mat extended to the MEK by Saddam Hussein, it has stopped short of saying how it will get them to leave. Despite its assurances against forced repatriation, especially if individuals may be harmed in their home country, MEK members fear they will be deported to Iran, where they say they will face imprisonment or execution. MEK representatives talk loudly of a potential humanitarian catastrophe.

While the MEK may question the veracity of Baghdad’s concerns, in recent years the International Committee of the Red Cross (ICRC) has helped more than 250 members enter Iran from across the Iranian border with little fanfare. "We are there as witnesses to make sure everything goes well," says Dorothea Krimitsas, ICRC spokesperson for the Middle East, adding that if allegations of ill treatment arose, the ICRC, would take them up with the authorities. Krimitsas says the ICRC hasn’t received any new requests for voluntary repatriation. But that’s only one way to leave. There are reports that in recent months defections from the camp have increased, although Ashraf leaders deny that anyone has left since January.

In the increasingly acrimonious debate about the future of Camp Ashraf, especially between Rubaie and MEK leaders, the quest for straight answers sometimes seems like a fool’s errand. It’s made more so by each side’s well-oiled PR machines that are adept at periodically sliding slippery claims and counter-claims into the media. For example, the MEK claims that Iraqis are withholding food and medical supplies and preventing doctors from entering the camp. That’s "baseless, it’s a pack of lies," Rubaie says. Similarly, Rubaie insists that the MEK is a cult, whose "brainwashed" members need to be separated from the 25 or so leaders and "detoxified" so they can resume normal lives. "Sheer lies," says Madani, the MEK spokesman.

Nevertheless, former members claim that the MEK is a cult, one that isolates adherents from their families, seeks to control them by limiting access to outside information, and prevents them from having sex. Indeed, there are no children at Camp Ashraf. The youngest residents are in their 20s, something MEK legal advisor Behzad Saffari says is because "military camps are not places for family life."

Yet when pressed for reasons why they should remain in Ashraf, given that they are not Iraqis and the new regime doesn’t want them, Saffari, Madani and several other MEK leaders as well as a number of residents, all bring up fervent, personal feelings. "We are not talking about different regimes, we are talking about personal lives," says Madani. "We have made a home here." He goes further. "We are not trying to have any impact on the Iranian regime. What does the Iranian regime want from us?"

The misunderstandings don’t stop there. An inter-agency task force including the CIA, FBI and other U.S bodies screened the residents of Ashraf in 2004 to determine if any were prosecutable under U.S law for alleged terrorist activities. The MEK insists that its members were all cleared. "The U.S. does not officially consider Ashraf residents as terrorists," says Madani. "MEK is something else." However, a U.S. official says that the residents of Ashraf who are members of the MEK are considered part of a terrorist organization. The official adds that non-member residents may also be considered to have provided material support to the organization. An MEK spokesman says all of the camp’s 3,418 residents are members of the group.

The MEK also insist its members still have the "protected persons status" issued by the U.S after the 2003 invasion. Madani pulls a photo ID out of his wallet that indicates that he is a protected person. "This is a permanent card," he says. "It has no time of expiration." The obligation to treat the MEK as protected persons under the law of war ended when the Coalition Provisional Authority handed over responsibility for governing Iraq to the Iraqi interim government in June 2004 which ended the occupation of Iraq. "Protected person status is never a permanent status as it applies only during circumstances of armed conflict or occupation," a Western official says.

The claims and counterclaims will no doubt continue to ricochet between Baghdad, Tehran, Washington and of course, Camp Ashraf. As two journalists head out of the camp in the early evening, past the segregated, one-story barracks-style dormitories and canteens, along paved streets lined by eucalyptus and palm trees and dotted with orange and yellow daisies, the faint echo of chanting protesters gradually gets louder. The people with the placards are still standing near the entrance, still staring out beyond the camp, still chanting. And there’s still nobody there to listen.