The recent incidents at Camp Ashraf where a number of residents, incited and organized by the cult leaders, confronted the Iraqi Police, ended with the death and injury of some of them. The act once again showed the brutality of Rajavi’s gang in rising crisis and creating constant tension for their propaganda. They never matter the victimization of their rank and file but they only matter how to feed their deceitful propaganda machine as Secretary of State Hillary Clinton said about the move of Iraqi Police to Ashraf :"It is a matter now for the government of Iraq to resolve," 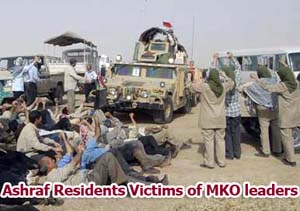 We deeply believe that MKO leaders try to maintain Camp Ashraf as their ideological and strategic container by launching false propaganda and mongering crisis, they violate all international laws based on the right of sovereignty of the nations on their own territory.

We as the ex – members of MKO, who returned to our homeland and now are living in Iran peacefully, condemn MKO leaders’ plot to create crisis and tension by warmongering, terrorism and violation of international laws and finally victimizing Ashraf residents for their own inhumane cause. We know that MKO leaders are terrified by easy access of Iraqi police to their base since it will pave the way for the access of International human rights bodies and also residents’ families to them.

The ideological leader of MKO knows well that if their base is supervised by Iraqi officials, the release of captured members will be more likely. Therefore they try in any way to stop Iraqi supervision over the camp to prevent the decline of their forces.

Their anti-democratic acts contradict the most basic human rights.

We want them to stop crisis mongering in Camp Ashraf and provide the residents a peaceful relaxing atmosphere, without any control or supervision by their authorities, so that they can visit their families in mental security and can decide for their future by their own free will.