Sobhani was separated from his daughter and wife for more than eight years.

A former member of the terrorist Mujahedin-e-Khalq Organization (MKO) claims the US turned a blind eye to the terrorist nature of the ‘Rajavi cult’. 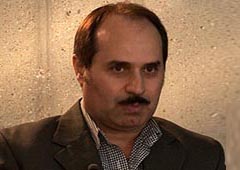 Mohammad-Hossein Sobhani, 49, from the central Iranian town of Saveh, came into contact with the MKO two years before the 1979 revolution in Iran, which overthrew the pro-US Iranian monarch, Mohammad Reza Pahlavi.

Five year later, after working in the organization’s administrative and student departments, he was whisked away to Iraq to assume his role “as a unit commander at the training school for urban guerrilla warfare.”

After questioning the organization’s “armed struggle and presence in Iraq”, Sobhani claims he was beaten, tortured and “held in solitary confinement for eight-and-a-half years, from September 1992 to January 2001.”

“The reason why I started to raise my objection was that I believed that the strategies employed by Masoud Rajavi were meant to secure his domination on its members,” Sobhani said in an exclusive interview with Press TV.

He would separate couples claiming that “such practices would liberate the members” from competing loyalties. Their children were also sent to European countries, Sobhani said.

“Rajavi would justify forced divorces by claiming that these practices would free a member, and pave the way to transform a micro society into a macro one and overthrow the Islamic Republic,” Sobhani said.

During his interview, he also claimed that because “the organization forbids matrimony, for the past 25 years no child has been born to a man and woman inside the organization.”
He said the US had committed a colossal mistake in not dealing with the residents of the MKO training camp in eastern Iraq, known as Camp Ashraf.

“Rajavi maintained a mercenary-like relationship with Saddam Hossein, after Iraq’s invasion he wanted to forge the same relationship with the Americans so he announced that he was ready to [willingly] lay dawn his arms,” Sobhani explained.

“Although the Americans were fully aware of the fact that the MKO was a terrorist organization, they still cooperated with Rajavi,” he claimed.

Americans in Iran were one of the primary targets of the group throughout the 1970s. They assassinated a number of American citizens, namely William C. Cottrell, Colonel Lewis L. Hawkins, Donald G. Smith, and Colonel Jack Turner inside Iran.

“As a former member of the group, I feel that the Americans have made a grave mistake with regards to the organization. Six years after overthrowing Saddam, the MKO is still brainwashing the residents of Ashraf Camp with the help of the Americans,” Sobhani said.

The MKO was founded in Iran in the 1960s, but its top leadership and members fled the country some twenty years later after carrying out numerous acts of terror inside the country.

The group masterminded a series of assassinations and bombings inside Iran, including the 1981 bombing of the offices of the Islamic Republic Party, in which more than 72 senior Iranian officials were killed, including the then Judiciary Chief Ayatollah Mohammad Beheshti.