The process of manipulation in cults is a never ending and non-stop methodology which guarantees existence of the cult and maintenance of members in the isolated atmosphere of the cult. 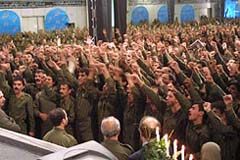 The 36 Ashraf residents, who had been detained by Iraqi Police after the raid on the camp, attended their cleansing meeting under the supervision of Massoud Rajavi, following their release from Iraqi prison. The video of the meeting was aired on MKO’s TV channel and published on their website a few days ago but only for a short time. The video showed some of the released members attending the meeting on their hospital bed. They attended the meeting just a few hours after their release. This shows how vital indoctrination meetings are for cult leaders. The immediately held cleansing meeting where some of the participants weren’t feeling well due to the hunger strike they had gone in the prison, according to their indoctrinations.

The participants confessed that they held their self – criticism meetings even in Iraqi prison! They told to their God-like leader, Massoud Rajavi, that they held the meetings even in groups of two under any circumstances. As MKO’s TV channel showed, Current Operation (cult jargon) is so influential that the 36 released members noted that their only objective is satisfying their leader, Massoud Rajavi.

During the meeting Massoud Rajavi spoke to the audience via telephone. The presence of Rajavi himself in the meeting indicated the importance of meeting to the organization that held the cleansing meeting under the supervision of the highest authority of the group.

The video showed the audience including the 36 released members clearly declared that they are always ready for absolute obedience to leaders’ orders. This film represents one of the few times that MKO’s internal relation is revealed to outside world and maybe that’s why they kept it on their website only for more a few days and then they removed it. The true nature of Rajavi’s cult was announced on its website in the best way.

Today MKO’s propaganda champagne launches too much effort to gain the West’s support but the film of the cult’s manipulation session sill bring about contradictions around the group which has always claimed to be democratic, to seek freedom and liberation of thought and speech for people. The show asserts the undemocratic cult-like nature of the group that will definitely make the West feel the threat of such a destructive cult.

The West is absolutely concerned about the threat of cults such as Al Qaida or MKO because the danger caused by such cults today is risking the lives of a lot of people in the world including Iraq or Afghanistan.

The devoted members of the cult always promise that they are prepared to commit suicide operation for the cause the leader says.

As the participants of Rajavi’s cleansing session said, they welcome pain, hunger and death just for their leader who, according to them, is the only one who suffers the most. The confessions of Ashraf residents would be a great lesson for the West since the potential danger of such a cult will not be limited to the cult itself but to the world community as what happened in June 2003 after the arrest of Maryam Rajavi by French Police.