Behind the bars of a mind control cult, like Rajavi’s destructive cult, the leaders never want the internal affairs of the cult to be revealed. They are well aware that if their manipulative practices are externalized, the cult existence will be endangered since the human rights bodies and the international community never ignores such abusive acts. That’s why Rajavi is terrified by the testimonies of former members who externalize the internal affairs of the cult and always tries to label them as the agents of Islamic Republic’s intelligence ministry. 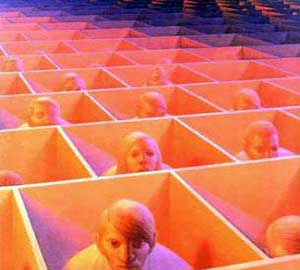 On the other hand, the isolated members of the cult who are brainwashed through complex manipulation sessions and other cult jargons are not able to have any access to outside world. They are never informed of the true events taking place outside Camp Ashraf. All news and incidents are filtered and censured by cult leaders and then published for cult’s captured members. In fact, the Rajavis are also terrified by the truths that might be internalized by external elements.

As it was published in the media, the 36 Ashraf residents who were arrested by Iraqi police after the raid on Camp Ashraf in July 28th,were released on Wednesday October 7th , the detainees who were on hunger strike (that was ordered by cult leaders) while they were in Iraqi prison were taken to hospital due to their crucial health problem according to MKO’s spokesperson and now they are in a kind of medical quarantine ! After about 5 days since their release there have been no special news or interviews on MKO’s websites although its propaganda system has always been ready to hunt an opportunity for a big show-off. Even the cult’s TV channel, Simaye Azadi, which is its non-stop working propaganda machine has not published further news or interviews with liberated members.

As usual the cult should have taken the most use of the so-called atrocities against its detained members but in fact it prefers to keep silent.

One might suppose that these 36 individuals, who were far from the cult’s indoctrinations for more than 70 days, could find an occasion to be alone by themselves. They could face their individuality without the controlling regulations of the cult which had dominated all aspects of their life and their soul.

They might have had enough time to contemplate or meet other people with different ideas. They might have found new facts about the outside world which may oppose to what the cult had made them believe. In such a condition, the old terrifying case might have happened: the external facts have been internalized in the members’ minds.

Therefore, the leaders have to keep them in a mental quarantine too because their mind should be reorganized according to cult’ indoctrinations. But how late could the cult leaders stop the truth coming to the camp? This is an unavoidable fact.