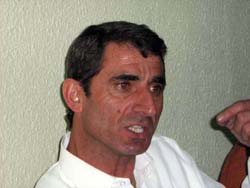 Akbar Mohebi was warmly welcomed by his family who were so impressed.

”I should say that I’m ashamed because I made you a lot of grieves during the years of my membership in MKO” he said, “ Although I am so happy about my return to my country and family, I feel very sad because I cannot see my father and mother alive among my family members.

Damn with Rajavi, the traitor who deceived us with his slogans of “support for people and revolution”. His hysteric ambitions for power blocked any emotional relation with our families so he could control our minds to keep us in his caves far from the reality of Iranian society.”

Like other defectors, Akbar also suffered a period of being far from emotional relationships. He added:”I am so eager about living with you. I need your kindness and affections although I failed to be with you during my imprisonment in Rajavi’s cult. I remember the time you came to Ashraf to visit me. Under the manipulation system of the cult, Rajavi deceived us to insult our families who had come to Ashraf.” 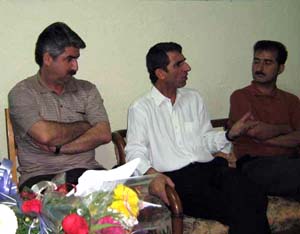 Mr. Mohebi’s brother and sisters who are some of educated people of Gilan, engaged to try their best for helping their beloved brother regain his lost individuality.

Hamid Hajipour, another defector who had returned to Gilan four months ago, also attended the little celebration. He welcomed Mr. Mohebi and spoke of his life experiences during the last four months.

Nejat Society of Gilan congratulates the repatriation of Mr. Akbar Mohebi, wishing him prosperity and success in his new life, relieved from the notorious Camp Ashraf. We hope to see the release of all other victims of MKO.