TEHRAN, Jan. 8 (MNA) — Iran and Iraq have made three important agreements for resolving the disputes over their borders, Foreign Minister Manouchehr Mottaki said on Thursday. 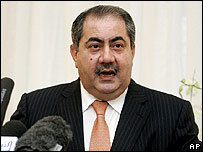 Mottaki made the remarks during a joint press conference with Iraqi Foreign Minister Hoshyar Zebari in Baghdad.

Elsewhere in his remarks, he said the Iranian and Iraqi border forces are stationed at “their places” near the Al-Fakkah oil field and expressed hope that the technical committee would start erecting the fences along the border to help everything revert to normal.

He went on to say that Tehran-Baghdad relations are friendly and based on respect.

Those who seek to benefit from undermining these relations will get nowhere, he added.

He made the remarks in response to the recent propaganda by some U.S. and Arab media outlets, which claimed that Iranian soldiers had crossed the Iraqi border and seized an Iraqi oil field.

However, Iran rejected the claims and announced that the well in question is not located in Iraqi territory.

The Al-Fakkah oil field is one of the many joint fields that Iran shares with Iraq. Iranian and Iraqi officials have concluded agreements over the past few months to develop the Paydar, Paydar-Gharb, Naftshahr, Azar, Dehloran, and Azadegan joint wells and other joint wells.

The two countries also recently agreed to set up an arbitration commission to clear up the misunderstanding over the borderline well.

Iraqi Foreign Minister Zebari said, “We have agreed to normalize the border situation between the two countries and return to the previous situation.”

He described Mottaki’s visit to Baghdad as an “indication that there is an honest desire to find solutions to the border dispute.”

He went on to say that Baghdad is determined to expand its ties with Tehran.

On the Iraq-based terrorist group Mojahedin Khalq Organization (MKO), Zebari said Baghdad will never allow any armed group to use Iraqi territory as a base to attack its neighbors.

He added that Baghdad has taken a series of measures to establish its sovereignty over Camp Ashraf, where the terrorists are currently being held.

The MKO has been listed as a terrorist organization by many international organizations and countries, including the United States.

The terrorist group targeted Iranian government officials and civilians in Iran and abroad in the early 1980s. The MKO also attempted an unsuccessful invasion of Iran in the last days of the eight-year Iran-Iraq war in 1988.

In addition, the MKO was involved in massacres of Iraqis under the direction of the Baathist regime of former Iraqi dictator Saddam Hussein.

During a separate meeting on Thursday, Mottaki and Iraqi President Jalal Talabani discussed ways to improve bilateral relations between the two countries.