How do you tolerate such terrorist organization on your soil? 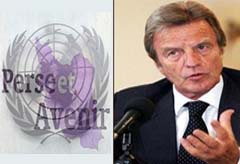 With Our best greetings and wishes to you and the honorable people of France,

As you are well informed that the people mojahedin organization (PMOI) which is a terrorist – cultic organization, unfortunately has pitched its main headquarter in your country for many years and they have masterminded and commanded numerous terrorist measures in iran and Iraq during past decades.

France is among the countries which in war against terrorism is in the front line, so according to this fact how can it tolerate and bear such a terrorist and bloodthirsty organization on its soil? The organization which perpetrated the assassination of American Colonels and Generals in Iran in mid 70,s and even they have composed and written anthem and articles in tribute of those assassinations. The organization which its ideology is based on violence and terrorism and believes in violence and bloodshed and even along furthering its cultic objectives is coercing and compelling its own followers and trapped members to burn themselves vis a vis the astonished and astounded eyes of French people.

The organization which its terrorist record in Iran and Iraq is not covert to anyone and its crimes and abuses are revealed and divulged by brave disclosures of separated and critics and `as a result of that its evil and detestable image is disclosed and divulged.

MR. Kouchner we ,according to our experiences which are the outcome of decades of captivity in this cult, know it as our humane task to draw the French law makers and politicians’ attention and yours to the following facts:

1. The Rajavi’s cult is a very dangerous and organized which by using the brainwashing and religious indoctrinations’ techniques , they are capable of utilizing their deceived members `whenever and wherever requires like the self burnings in 2003 in Paris.

2. This cult by taking advantage of freedom and democracy ruling upon European and western countries and by spending huge amount of money is reinforcing its cultic bastion in France and across Europe, presence of the cult’s leader , Maryam Ghajar Azdanlo (Rajavi) in European parliament and meeting with French politicians and mayors are among those efforts.

3. The leaders of this notorious cult by taking advantage of western – favorite words and playing with words as well as showing off as freedom lovers and democratic organization have deceived a number of European politicians and parliamentarians and unfortunately they are utilizing them along furthering their cultic interests.

4. This cult which does not allow its members’ families to get in touch with their loved ones and some of the families who have gathered behind the closed gates of the notorious Ashraf Garrison since one month ago just to meet with their loved ones ,have been insulted, accused and mistreated by the operatives and ringleaders of this cult and so far they have not succeeded to meet their children and loved ones after almost one month of entreating endeavors . While this notorious cult and its leaders are dealing and behaving with their own members’ families who are their fellow countrymen and compatriots in like manner ,so what do you expect them to do while their cultic interests are in danger in your country? Are they trustworthy?

The only answer and solution to prevent the violence and inhumane activities and measures of this Mafia -terrorist cult is to confine or stop their activities fully in France once and for all.

With our best wishes to you and the honorable French people.

Solution or an escape from challenges

Under President Macron, France can play a pivotal...