[MKO’s extensive propaganda campaign for spreading faked information about the true nature of its terrorist destructive cult had set for a new purification project in order to remove dirty stains of terrorist activities and atrocities of their cult from the historical memory of public opinion. To achieve such an unlikely goal, Ali safavi, the group’s henchman, does too much effort to write a series of posts denying the crimes committed by his organization.
Nejat Society, in turn, views it as essential to enlighten the minds about the claims made by MKO remnants.]

In another effort to purify MEK’s record, the group’s remnants published another article allegedly to “shed light on the provenance of MEK’s designation [1] as a terrorist organization. As always, the so-called article includes list of allegations, accusations to attack Islamic Republic and Western politic men, accusing former for alleged disinformation against MEK or the latter for appeasement policy towards Iran. However, the writer never tries to defend his organization for its terrorist label. He doesn’t present the least evidence to prove that his organization has not committed terrorist activities except in one place.

Thorough introductory paragraphs he claims that “MEK’s resorting to armed actions against military targets in Iran until summer of 2001 has been cited by some Western government agencies, including the US Department of State, as evidence to invite the designation of the group as terrorist”[2], although in fact more than 90% of their intended targets and almost 95% of their casualties have been Iranian civilians.[3]In 1972 MEK’s first terrorist operation took place in Tehran where they launched a bombing attack against an electricity factory which was not a military target. Since then, the group launched a countless number of terrorist operations against Iranian civilians especially after the Islamic Revolution. The list of MEK’s mortar attacks, bombings and assassinations has been already published in numerous occasions by various international, governmental or private institutes including defectors’ websites, US Department of state, RAND (National Defense Research Institute)… 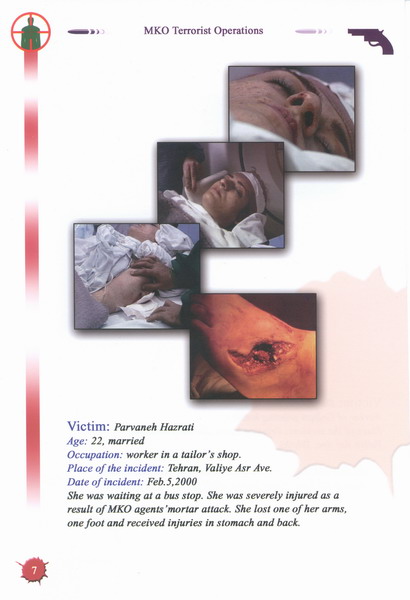 Among MEK’s terrorist acts against civilians, the most crucial ones are “Attack on offices of General Motors in 1972, Bombing of offices of Oman Bank and Pan-American Oil and of gates of British embassy in 1974,suicide attacks targeting senior clerics in Tabriz, Khorasan, Shiraz and Rasht in 1981 and 1982,simultaneous raids on Iranian embassies in 13 countries in 1922,bombing of Imam Reza Shrine in 1994,Assassination of two former MEK members in 1996,bombing of Tehran Revolution Court in 1998,mortar attack at Chamran University of Ahwaz 2000, mortar attack on President Khatami’s palace in Tehran in 2000,mortar attack on residential housing complex in Tehran in 2000.[4]

In his effort to portrait his notorious organization as an important figure in Iran-West relations, Safavi calls his group “the biggest enemy” of Islamic Republic. He fails to consider that MEK’s deliberately targeted and planned sabotage operations against civilians and its bad fame due to collaboration with Saddam Hussein during the eight years of Iran-Iraq war, ends in the hatred of the majority of Iranians. Elaheh Hicks of Human Rights Watch says:” many, many Iranians inside Iran resent the MEK, the Iranian government actually benefits from having an opposition like this.”[5]

According to what criteria an organization will be considered “terrorist”?

“Terrorism “is in the most general sense, the systematic use of terror especially as a means of coercion. since 1994, the Unite Nations General Assembly has repeatedly condemned terrorist acts using the following political description of terrorism:” criminal acts intended or calculated to provoke state of terror in the general public or persons or particular persons for political purposes are in any circumstance unjustifiable, whatever the considerations of a political, philosophical, ideological, racial, ethnic, religious or any other nature that may be involved to justify them”[6]

Therefore, MEK’s use of violence against civilian targets should never be justified by its weird cult-like ideology. This is what Ali Safavi fears to discuss. He daren’t to deal with terrorism designation in nature because he and his ideological leader Massoud Rajavi have nothing, no evidence to defend their terrorist destructive cult for its numerous acts of terrorism. They are not able to prove that their terror label is invalid so they try to accuse the Islamic Republic instead of defending their group.

Also a less politically and emotionally charged, and more easily definable term for terrorism is “violent non-state actor”[7] this term covers the whole MEK’s activities since its foundation. The group has been always engaged in armed struggle and violent overthrow of Iranian regime, it has never been a governmental entity and its background had been blended a countless number of violent attacks against military or civilian targets (about 12000 deaths).

After Massoud Rajavi fled to France in 1981, his first decision was to change the name of notorious MEK (Mujahedin –e- Khalq) to NCRI (National Council of Resistance of Iran) which allowed the MEK to stay in Western political scene and not to be threatened as a terrorist organization. However, NCR was also added to Foreign terrorist organization list of Department of state in August 2003 and its office in Washington DC was closed and its assets were blocked.

Rajavi’s crimes against humanity do not end in Iran and against Iranian civilians, according to many documents, MEK had a longstanding alliance with former Iraqi dictator. They cooperated with Baath regime to suppress Kurds’ uprisings in Iraq in 1991. A lot of former members offered testimonies of Kurds suppression operation (Morvarid Operation) where Maryam Rajavi ordered members to “take Kurds under the tank and save bullets for Iranian soldiers”.[8]

Along with his deceitful propaganda campaign, Ali Safavi claims that Western policy toward Iran has failed and it is time for Obama administration to unite with his terrorist cult of personality. He fails to understand that the reality is that the world community especially Iranians, Iraqis and even Americans never forget the atrocities of MEK terrorist Organization and the threat of that destructive cult.