Letter to Mr. joe Stork,Director of HRW for Middle East 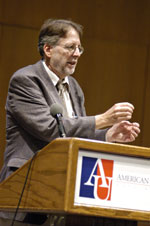 With our best regards to Human Rights Watch organization for their constant and steady endeavors toward human rights throughout the world,

Your Excellency , with this preface we would like to draw your attention to this fact that we the backers and supporters of the Seminar , Support of the Rajavi’s castle victim’s families (Ashraf Garrison-Iraq) which occurred in Paris on 19th of June /2010, are separated and victimized members, critics and families of those stranded victims in Ashraf garrison who have a brother , sister, father or mother and friends in there who are under severe indoctrination and brain washing methods .We had been in the same situation as they are now ,but we could set ourselves free from all those indoctrinations and brain washing methods and fortunately we gained our freedom by separating ourselves from this organization, and now after gaining our freedom, together we want to help the other victims who are still kept in Ashraf Garrison and pmoi’s main headquarters in Paris

We urge you to provide an opportunity for those families awaiting behind closed gates to meet their loved ones whom they have not seen them for 20 years in some cases. The leadership of this cult (PMOI) have deprived those victims of having any communication with their loved ones by labeling those desperate families as Iranian intelligence service agent whereas this leadership lyingly pretend that they are supporting human rights and Iranian people’s rights, but we should ask the leaders of this cult that are not those families part of Iranian people? at the end ,I appreciate all your efforts towards helping those desperate families to see their relatives and i am entreating you again to provide an opportunity for those families to meet their loved ones , who are living in a very bad and harsh situation inside Ashraf camp.

Majlis to pursue extradition of MKO to Iran