In the Alborz Mountains of northern Iran there is an isolated area known as the Valley of the Assassins. It is here where Hassan Sabbah, a charismatic man who died in 1124, founded a 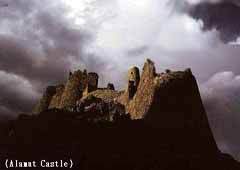 notoriously violent radical Islamic sect referred to by historians as the Hashaashiyun (the Druggers). Interestingly, this word, hashaashiyun is the origin of the English word assassin, which means killer. In this valley, Hassan Sabbah created a small and very successful empire of dedicated followers from whom he demanded total devotion. Iranian literature and lore preserve the fascination and opinion that Hassan Sabbah systematically created one of the most effective terrorist groups in history. Sabbah’s magnetic personality and uniquely efficient leadership promoted such intense belief and devotion that members, with the pledge of martyrdom, were able to commit assassinations without hesitation. The zealous follower’s committed ferocious acts of killing, believing that there was a purpose to their heinous acts—and that they would be sent to paradise if they were killed while serving their leader. In effect, martyrdom was an essential element in Hassan Sabbah’s power scheme. Indubitably Hassan Sabbah and his followers in the infamous Valley of the Assassins helped lay the foundation for today’s continued fascination of—and for a few, total acceptance of—suicide .

Hassan Sabbah was an educated, well travelled, intelligent man who spent many years as a missionary. When he chose to gain power and control over the community in the Alborz Mountains, his plan worked because he was able to inspire commitment and action as well as kindle complete obedience from his followers—to the point that followers’ previous sense of right and wrong was phased out of their mindset. Hassan Sabbah knew how to wash a brain—to erase all notions of good and bad—to let fade right and wrong. He replaced followers’ thinking with distorted morals: the notion of “good” became obedience toward the leader, and the notion of “bad” became disobedience towards the leader. With this immense power, Hassan Sabbah’s wishes were the followers’ commands—if it was his wish for a follower to kill, the follower killed. If it was his wish that a follower die, the follower died. Thus became the association of the word killer with the word assassin.

Hassan Sabbah’s group was by today’s definition a cult. He had created a deliberate agenda in order to serve himself for the purpose of creating power for himself. The Hashaashiyun devotees martyred themselves believing that they would attain fulfillment only through servitude. In this way, they gradually earned degrees, which put them closer to their leader who they believed represented God.

The cult created by Hassan Sabbah was successful given that it lasted upward of three decades . Hassan Sabbah’s cult epitomized the idea of suicide killings, and had a significant impact on other subsequent cult leaders particularly the husband and wife team, Maryam and Massoud Rajavi of the Mojahedin-e Khalq, a modern radical religio-political group (based in Paris) who bedevils Iran. Because there is an acceptance of this radical notion from a tiny minority in the Middle East, it is only natural that the MEK would take advantage of it, and then exercise such a “killing device” in their programme de formation. For the naïve MEK members, leaders implementing this contrivance would not be abnormal in the hearts and minds of the

truly dedicated; and committing suicide would not be out of the ordinary because culturally the idea is still present, although most Middle Eastern people and certainly most Iranians would not support such an outrageous “opportunity.”

In a strikingly similar fashion to Hassan Sabbah, in the early1980’s Massoud Rajavi, came to realize that in order to achieve organizational efficiency and maintain his own power, a system must be implemented for the MEK. Professor Ervand Abrahamian—one of the world’s foremost experts on the cult, whose 1989 extensively researched book, The Iranian Mojahedin is still being used to educate professors, politicians and policymakers all over the world—details the cult’s history and evolution. Although it is common knowledge among politically- minded Iranians, Abrahamian affirms that the group officially began in 1963, as a small university student-discussion group. Shortly thereafter, with a revolutionary ideology, they took up arms, and after almost twenty years of growth and some support from Iranians, membership began to dwindle due to the sociological factors which determined their function was not really useful for the Iranian public. Because of this, the group restructured itself into a religio-political sect, and in the mid-1980’s, the Mujahidin, from an outsider’s perspective, had qualified itself as a cult. After renaming itself the “National Council of Resistance of Iran,” the group declared that it was actually founded in 1981. [1]

Abrahamian confirms that “by mid-1987, the Mujahidin Organization has all the main attributes of a cult […] the organization had granted unlimited power to its charismatic leader, [Massoud Rajavi].” He furthers, “Immediately the group had created a rigid hierarchy in which instructions flowed from above and the primary responsibility of the rank and file was to obey without asking too many questions. It has produced its own handbooks, censorship index, world outlook, historical interpretations and, of course distinct ideology—an ideology which, despite the organizations denials, tried to synthesize the religious message of Shiism with the social science of Marxism. It had its own slogans, insignia, icons, relics, ceremonies, rituals and liturgy. It had formulated its own esoteric terminology injecting new meaning into old Islamic words and sometimes coining entirely new terms. It had its own history, martyrs, hagiographies, honored families. It even had its own calendar.

“The organization had adopted its own dress code and physical appearance. It had begun to see the world as divided into two contradictory forces: on one side was the Mojahedin, the vanguard of the select, and those willing to accept its leadership; on the other was Khomeini, the forces of darkness and anyone refusing to accept Mojahedin leadership.
“Essentially the “Mojahedin became increasingly a world unto itself.” [2]

Sadly, in the name of Islam, and in the name of freedom and democracy, after the mid 1980’s, MEK members became increasingly devoted, increasingly isolated—as they were forced to stay on compounds and in camps based in Iraq—the biggest one being Camp Ashraf, where many members are still being housed and are prevented from knowing about the outside world. The MEK leaders, Maryam and Massoud Rajavi remain idols. Members worship them. Today the innocent devotees “volunteer” as suicide bombers or hunger strikers, willing to die for their cause and for their leaders. But the MEK, will never openly admit this practice is required. In January 2009, Iraqi national security adviser Mowaffak al-Rubaie’s made a statement to the Washington Post declaring that “a member of the organization had turned himself in to Iraqi security forces and told them that group leaders had instructed him to detonate explosives at the headquarters of the Iraqi security forces.” [3]

In July 2003 upon the arrest of MEK leader Maryam Rajavi, MEK members took to Paris’ streets and engaged in self-immolation. [4] [At least ten] members set themselves on fire in cities across Europe. [5]

The MEK suicidalists are the modern parallels of Hassan Sabbah’s “Druggers” in the Valley of the Assassins. MEK defectors describe the group as a cult. [6] Former MEK members told Human Rights Watch that when they protested MEK policies or tried to leave the organization, they were arrested, in some cases violently abused and in other instances imprisoned. Two former recruits told the human-rights group that they were held in solitary confinement for years in a camp operated by MEK in Iraq under the protection of Saddam Hussein. [7]

The MEK is a group of misguided individuals who do evil things to themselves and others—not out of malice, but out of faith and devotion to a pair of twisted leaders.