Letter of Miss Babaee Nezhad to the International and humanitarian organizations

In the name of God

I am Maryam Babaee Nezhad, daughter of Ja’far, 21 years old, living in Gazvin in Iran. 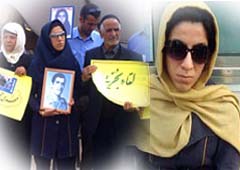 My mother was three months pregnant when my father who was a soldier in the Iran-Iraq war was captured by the Iraqis and became a prisoner of war. Many years past and I had no news from my father.

My grandfather Ali-Akbar became my guardian. After a while we were informed that my father has disappeared and following that we learned that he became a martyr.

For years whenever I wanted to talk to someone, I used to look at my father’s picture and I used to talk to him for hours. I had accepted the fact that I am an orphan.

Two years ago the Nejat Society in Iran contacted my grandfather and informed him that they have learned from the ex-members returning from Iran that his son (my father) is still alive and living in the Ashraf garrison the base of Mojahedin-e Khalq Organization (MKO) in Iraq.

That day when my grandfather came home I noticed that his eyes are full of tears. I asked instantly: “Oh grandfather! For God sake, please tell me what has happened”. He hugged me and then said: “My dear daughter, your father is alive”.

When I heard this from my grandfather I felt like a fireball. All I remember is that I screamed and I started crying and fall into the arms of my grandfather.

Oh God what is it that I am hearing? Is it true? Is my father alive? And I used to repeat these words continuously. 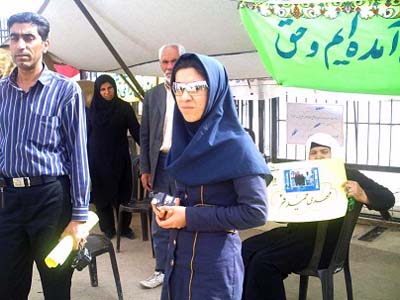 I told my grandfather why he is siting and doing nothing. I ask him to go and see my father immediately. He sighed and said: “I wish he was still a prisoner of war in the hands of Iraqis. As they say he is now with the MKO and Saddam Hussein gave him to them and apparently he is not allowed to see his family. As it appears in their cult even passing letters or contacting the family or anyone outside Ashraf garrison is forbidden”.

My grandfather said that he would do his best to approach Ashraf garrison with the hope that they might let him to visit his son.

Since I learned that my father is still alive and I cannot even call him I have cried day and night. After long waiting I eventually came to the gate of the Ashraf garrison along with my grandfather 5 months ago.

For two months I cried on a closed gate day and night and I called for my father, but the commanders of the garrison refused to let me see my father for even one hour after 22 years. I got sore eyes and had to return to Iran to undergo an operation on my eye.

I could not tolerate being away from my father. I had no motivation to study and I was ever so anxious to see my father. I insisted my grandfather to take me back to Iraq with the hope that may be this time they let us see him.
When my grandfather saw that he cannot calm me he took me back to Iraq to the gate of Ashraf garrison. This time I saw that many other families are picketing there. 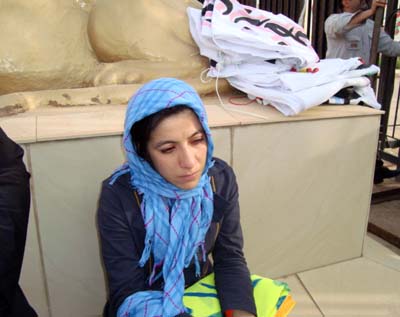 Ms. Sorayya Abdollahi embraced me like her own daughter and asked about my eye. I asked her if they have let the families to see their loved ones. She said with sorrow: “No my daughter. But during this time several members have managed to escape. I hope that your father be able to escape one day and cuddle her loved one”.

During this time in front of the gate of Ashraf garrison I called my father several times from the loudspeakers. I do not know if they allow my father to hear my grief.

The doctors say that if I keep crying my other eye would be infected too and that is the case at the present time. Now that Massoud Rajavi (leader of MKO cult) does not allow me to see my father I prefer to go blind and not see anything at all. A girl in my age needs a father but my father is seized by a cult.

I call upon all international organizations and humanitarian activists in Europe and in America. Come and see how Rajavi is playing with the emotions and destiny of a 22 years old girl whose wish is just to see her father.

I call upon all those who claim they fight for human rights and yet support Rajavi and his cult. Come and see how this group is dealing with its own members and their families.

I long for my father. Who should I say this? Mr. Ban Ki-moon? Mr. Obama? The Iraqi authorities? The Iranian authorities? Who?