A member of the Iraqi parliament on Monday described the US as the stumbling block to the expulsion of the anti-Iran terrorist Mojahedin-e Khalq Organization (MKO) from his country, stressing that Washington strives to block any move made by the Baghdad government to this end. 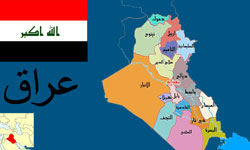 "The presence of Monafeqin (the hypocrites, as they are called in Iran) on Iraq’s soil violates the country’s constitution and the US is the main impediment to the expulsion of the terrorist group from Iraq’s soil," Ali Alaq told FNA.

He also underlined that the US is the key supporter and sponsor of the MKO.

"The Iraqi government has several times adopted measures to expel the Monafeqin [MKO]from Iraq’s soil, but unfortunately this (their expulsion) has not yet happened in practice due to the US pressures," Alaq added.

He strongly condemned the interference of the US officials in the internal affairs of his country, and described the US embassy’s support for the MKO as a move in support of international terrorism.

A former Iranian diplomat who accompanied Iranian Foreign Ministry Caretaker Ali Akbar Salehi during his recent visit to Baghdad announced on Sunday that Iraqi officials are resolved to immediately expel the anti-Iran terrorist MKO from their country.

"The Iraqi officials are seeking to expel the Monafeqin (MKO members as they are called in Iran) from the country’s soil as soon as possible," former Iranian Ambassador to Baghdad Hassan Kazzemi Qomi told FNA.

Also, Iraqi Foreign Minister Hoshyar Zebari told reporters after a meeting in Baghdad with Salehi on Wednesday that he and his Iranian counterpart had discussed expulsion of the MKO from Iraq at their meeting.

He expressed the hope that Baghdad would expel the terrorist MKO from Iraq soon in future.
Asked about the fate of the MKO, Zebari said the two sides "hope to find a way to close the MKO’s case in Iraq as soon as possible".

"There are some humanitarian commitments to which our government is loyal, but fulfilling these undertakings should not harm Iraq’s national sovereignty," he said.

The terrorist group joined Saddam’s army during the Iraqi imposed war on Iran (1980-1988) and helped Saddam and killed thousands of Iranian civilians and soldiers during the US-backed Iraqi imposed war on Iran.
Since the 2003 US invasion of Iraq, the group, which now adheres to a pro-free-market philosophy, has been strongly backed by neo-conservatives in the United States, who also argue for the MKO to be taken off the US terror list.

MKO’s call on US to arm the group “completely unacceptable”

Al-Sarraj: America supports MKO in Iraq as leverage in negotiations

Iraqi MP: The MEK counted on ISIL to help them stay in Iraq

MKO’s call on US to arm the group “completely unacceptable”

Al-Sarraj: America supports MKO in Iraq as leverage in negotiations

Iraqi MP: The MEK counted on ISIL to help them stay in Iraq

Azerbaijan to take in MKO members