The website (Iraq4allnews.dk) of the Saddamists in Europe have published a statement signed by their employed terrorist group NCRI (aka;Mojahedin Khalq, MKO, MEK, NCRI, Rajavi cult).

The reaction is again the threadbare allegation of attaching everyone to Iran. Reminding us of what Saddam Hussein used to say, that the Persians and Jews should be wiped off the face of the earth.

The reaction of the Saddamists comes after Anne Singleton produced evidence in Baghdad that the camp is the last untouched part of the Saddam regime’s suppressive infrastructure and that it is used to train, plan and support terrorist activities across Iraq in order to derail the process of democratisation in the country.

Note the flag presented in the site.

The flag of Iraq at the time of Saddam had 3 Stars (Baath Party) and the writing was a copy of the handwriting of Saddam Hussein.

The New Iraqi Parliament voted to change this to remove the stars and to change the handwriting to the Kufi font. 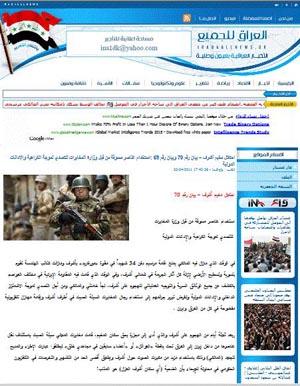 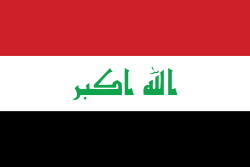 (The Iraqi flag after the fall of Saddam)