MKO and other terrorist groups

The document released by the Association for Defending the Victims of Terrorism (ADVT) belongs to the US-Iraq joint coordination force in Iraq’s Diyala province, where the MKO’s main training camp, Camp Ashraf (now the Camp of New Iraq) is located. 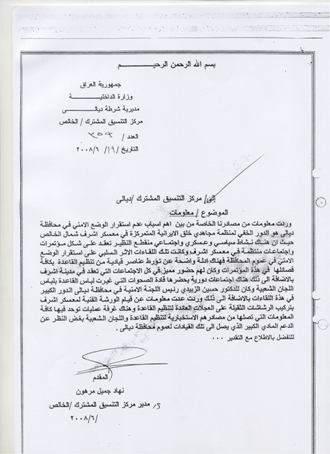 The document reveals that the MKO has played an active role in insecurities and instabilities in Diyala.

“Our special sources have informed that the MKO, based in Camp Ashraf in the North of Khales, has played a covert role in insecurities and instability in the Diyala province and it has had extraordinary political, military and social activities in the form of regular conferences and gatherings in Camp Ashraf,” the US-Iraq joint coordination force said in the document.

“There are clear indications about participation of al-Qaeda top figures and cells in these meetings. They have a strong presence in the meetings at Camp Ashraf,” the document says.
The document further reveals that the terrorist group has helped the Al-Qaeda mount heavy canons and large-caliber machineguns onto their military vehicles.

The MKO has been in Iraq’s Diyala province since the 1980s.
Iraqi security forces took control of the training base of the MKO at Camp Ashraf – about 60km (37 miles) north of Baghdad – in 2009 and detained dozens of the members of the terrorist group.
The Iraqi authority also changed the name of the military center from Camp Ashraf to the Camp of New Iraq.