People in Iraq’s Diyala province organized a protest outside Camp Ashraf where the terrorist organization, Mujahidin-Khalq, or MKO members reside. 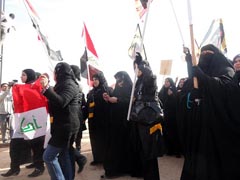 Most Iraqis say they are against the existence of the MKO camp and are deeply worried about its secret and illegal activities.

Some important figures turned out for the protest including tribal leaders, clerics and local government officials. Protesters shouted: "leave our country", and carried placards with anti-MKO slogans to express their intolerance towards the presence of a terrorist group that they say has caused so much trouble in their country.

Tribal leaders also want the authorities to accept public demands and expel the MKO once and for all.

Some local officials accuse western nations of pressing the Iraqi government to let the MKO stay in Iraq.

The MKO has been in Iraq’s Diyala province since the 1980s. It has been blacklisted as a terrorist group by many countries in the world.

The group is accused of killing Iraqi civilians during the 1991 uprisings and so helping Saddam Hussain prolong his grip on power.

The MKO is widely disdained in the region for having sided with Saddam Hussein during the dictator’s 1980-1988 war against Iran.