Former spokesman of, National Council of Resistance in London – member of parliament in exile according to the Huffingtonpost – has posted 19 articles on the Huffingtonpost since February 2010. Reading through the whole articles, I looked for the salient features. Surprisingly I came across with a common pattern in them that might lead the audience to wonder if Safavi, 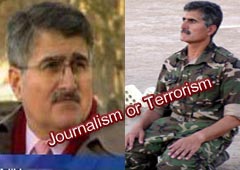 was pushing the idea of the Foreign Terrorist designated entity, Mujahedin Khalq (MKO/MEK/PMOI) for which NCR is an alias, according to the State Department.[1]

In at least 18 articles out of 19 he just mentions the words or phrases: MEK, Mojahedin Khalq , PMOI and National Council of Resistance for more than 340 times.(!) Out of this big number more than 20 times, he claims MEK as “the main organized opposition” that represents the Iranian people against the “regime”.

He uses the term “regime” to refer to Islamic Republic government for over 102 times. Out of these 102, about half of them (at least 50 times) he portrays the “regime” by notorious acts including “execution”, “massacre” , “torture” , “ crack down” ,”suppression” , describing “the regime “ by adjectives like “suppressive”, “inhumane”, “deadly”.

He proposes the allegedly “Iranian “,”popular resistance” as the force to bring “democratic change” and eventually ”democracy" in Iran for about 40 times. This “democratic change” will guarantee “human rights” ,”freedom” ,”women rights” and “democracy” for the so-called suffering Iranian people under the current “regime”, according to Ali Safavi.

Besides, he uses the term “nuclear weapon” about 10 times to warn about the “threat “of a “nuclear bomb” made by the “regime”.

In the entire articles, out of those 340 that he mentions MKO and its other names, at least 58 times he asserts that “terrorist designation” of the group by the State Department has been a “good will gesture” to the “regime” in Tehran and the result of the ”regime” ‘s propaganda against the group. He calls the group’s opponents in the West as “Tehran apologists” who apply “appeasement “policy regarding Islamic Republic.

Safavi proposes the group’s “third option” which includes support for them to run their so-called “peaceful overthrow” of “the regime” in Tehran. He uses the verbs like “should”, ”must”, ”need to”, ”can” – boldly used in near 30 statements – to give advice ,make recommendation and even order the US administration, particularly President Obama to “immediately end shackling the MEK”.

Member of the allegedly parliament in exile mentions the name of MEK’s leader – in hiding now- Massoud Rajavi as the leader of the movement that wants to replace the “current regime” in at least 15 cases. He also introduces Mayram Rajavi (6 times) as the “president elect of Iran’s parliament in exile”.

Out of those 21 cases that he mentions the name of the Rajavis ,in 11 cases he refers to their speeches, messages and letters to prove their legitimacy, claiming MKO as “a Muslim organization” that believes in a “tolerant and democratic interoperation of Islam”.

The essence of Ali Safavi’s writings taken out of the particular patterns he applies to propose his arguments proves the hypotheses that he is promoting the cause of MEK in an apparently moderated media like the Huffington Post. That’s kind of biased journalism.