written by NIAC July 9, 2011
Former U.S. officials have admitted to receiving cash to speak at pro-MEK conferences. Now, officials who may be getting paid to publicly advocate in support of MEK (Mujahedin-e Khalq) are being invited to testify before Congress. 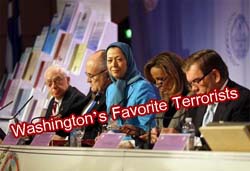 Today at 2pm, a House Foreign Affairs Subcommittee is holding a hearing on the MEK in which three out of the four witnesses have appeared at conferences to advocate for the MEK to be removed from the U.S. terror list.

Among the officials is former Bush Attorney General Michael Mukasey, who flew to Paris last December to appear alongside MEK leader Maryam Rajavi and call for the U.S. to remove MEK from the terrorist list and start “offering all possible overt and covert support to the opposition.”

Interestingly, the only official testifying today who has not participated in pro-MEK events, Ray Takeyh, has been falsely smeared by MEK as being “pro-ayatollah” and “a leading figure of the pro-Iranian regime circles.”

Unfortunately, none of this comes as a surprise. In fact, the Chairman of the Oversight and Investigations Subcommittee, Dana Rohrabacher (R-CA), and top members like Ted Poe (R-TX), are themselves avowed supporters of the MEK. They even recently led a delegation to Iraq where they pushed the MEK agenda and promptly got themselves kicked out of the country. The embarrassing incident prompted the U.S. Embassy in Iraq to publicly distance itself from Rohrabacher and his pals and explain the group did not speak for the U.S.

If only now somebody would step up to explain why the laws aren’t being enforced to prevent former officials from getting paid to appear alongside terrorist leaders like Maryam Rajavi.

Mujahedin Khalq are not democrats or freedom fighters