We first blogged about Bachmann supporting the MEK in this November 22, 2010 post. Here is a re-post:

Last week, Michele Bachmann appeared at a press conference at a Freedom Watch symposium titled "National security, freedom, and Iran—is it time for U.S. and Western intervention?" Bachmann voiced her support for The People’s Mujahideen Organisation of Iran (PMOI, also known as the MEK), asking that they be removed from the U.S. State Department list of Foreign Terrorist Organizations.

Who is the People’s Mujahideen Organization of Iran?

— The U.S. State Department has said the PMOI assassinated at least six U.S. citizens as part of the struggle to overthrow the Shah, backed the takeover of the U.S. embassy in Tehran and opposed freeing U.S. hostages. The U.S. government designated the PMOI a "terrorist" organisation in 1997.
— In the 1980s, the group’s leaders fled to France and also collaborated with Iraq during the 1980-88 war with Iran.
— In April 1992, the PMOI carried out attacks on 13 Iranian embassies around the world, causing significant damage.

The leadership asked the members to divorce themselves from all physical and emotional attachments in order to enhance their “capacity for struggle.” In case of married couples, this phase of the “ideological revolution” required them to renounce their emotional ties to their spouses through divorce.
When a reporter asked Bachmann about the lack of trust Iranian dissidents have for the People’s Mujahideen Organization of Iran, Bachmann replied with this money quote:
"Not every vehicle is a perfect vehicle and we don’t want to defeat the good because we are in search of the perfect."
Oh, the irony…

In the following video, Bachmann begins at 8:30, calls for supporting The People’s Mujahideen Organization of Iran, asking that they be removed from the U.S. list of terrorist organizations. Bachmann is followed by Alan Keyes who says the U.S should declare war on muslim "imperialism": 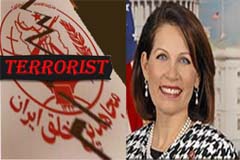 Bachmann’s campaign website:
The Democrats have stooped to a new low. Yesterday, Vice President Joe Biden reportedly referred to the Tea Party as "terrorists." Sign our petition and call on Biden to apologize for his outrageous remarks.

There’s an article today in Al Jazeera about all the support the MEK is getting in Washington from politicians like Bachmann:

Known for its cult-like behavior, the MEK (also known as the People’s Mujahedin of Iran, PMOI or MKO) fought alongside Saddam Hussein’s regime against its own country during the bloody Iran-Iraq war. This is one reason why it has almost no Iranian support, even if it refers to itself as the "most popular resistance group inside Iran" on its official website. It does, however, enjoy the backing of several US heavyweights with high national security credentials.

Besides having a history of supporting Sadaam Hussein, the MEK is a freaky cult:

Banisadr, 57 years old, has written a memoir about his life in the MEK until his departure in 1996 – an event he attributes to "luck". He said mind control was a normal occurrence at Camp Ashraf: "I remember being forced to attend a speaking session lasting for 3 days. In total I think we got around 2 hours of sleep a night." He was also forced to leave his family. "They told us to imagine sleeping with the corpses of our spouses. Not to think that they had been dead for a long time, but just long enough so that the body was still warm."
Camp Ashraf is closed to most outsiders, but in 2005 Human Rights Watch released a report describing the "mass divorce" that was imposed on Banisadr and all other members and "abuses ranging from detention and persecution of ordinary members wishing to leave" to "lengthy solitary confinements, severe beatings, and torture of dissident members". The former MEK members interviewed also reported "two cases of deaths under interrogation".

The article goes on to speculate why prominent politicos are supporting the MEK:

But strategic reasoning may not be the sole concern motivating this advocacy: some of the MEK’s prominent supporters have also reportedly received massive payments for speaking at their events. The New York Times reported that Ambassador Lawrence E. Butler, who has been trying to negotiate with the group, guessed that "about a million dollars was spent" on MEK lobbying "over the last six months". When he asked how much retired General Clark received, adding that "[h]e doesn’t get out of bed for less than $25,000", one member replied that the group’s advocates were not "doing it for the money".

And Bachmann may have committed a crime by supporting the MEK:

But in January, law professor David Cole wrote that Mukasey, Giuliani, Ridge and Frances Fragos Townsend could have committed a crime simply by vocally supporting the MEK’s cause in Paris. While proving liability is again the issue, the Patriot Act’s material support law makes it a felony to support an FTO by engaging "in public advocacy to challenge a group’s ‘terrorist’ designation or even to encourage peaceful avenues for redress of grievances," wrote Cole.

Reporters need to ask Bachmann why she supports the MEK.

From U.S. Silent on Raids against PJAK to aggressive lobbying for MKO