Department on Friday August 26th following the calls the group has made for several weeks and the dollars it has spent for its usually artificially magnified demonstrations. The agenda is to call the DOS to delist MKO which has been on the list since its creation in 1997. The gathering will be surely accompanied by speakers whose pockets are filled with the MKO dollars. The coincidence is that it is the International Quds Day ; an annual event on the last Friday of Ramadan in which people rally to express solidarity with the Palestinian people and opposing Zionism .

If these efforts made by the MKO and propaganda campaign and its lobby in the US administration end with its being delisted, it will be a remarkable transformation; MKO was a terrorist Marxist cult with the blood of Americans on its hands, it turns into a friend, an ally for the US in its animosities against Iranian government, big change.

Elizabeth Rubin, a contributor to the New York Times Magazine who visited the MKO’s Camp Ashraf in 2003, believes that American supporters of the group are two groups.” in fact, an unlikely chorus of the group’s backers – some of whom have received speaking fees, others of whom are inspired by their conviction that the Iranian government must fall at any cost,” she writes in her new article.[1] as a person who has been eye witness of what is really going inside the MKO, Rubin describes her experiences of visiting an authoritarian cult closely, warning the US Secretary of State, Hillary Clinton.”Mrs. Clinton should ignore their P.R. campaign,”she states.[2]

Removing the MKO from the list will not make it a good, reliable friend. Reza Nasri of Iranian.com asserts that as a “radical” group, MKO’s “fanatical ideology, pugnacious discourse, undemocratic structure, leadership mission and agenda”, signify it as a terrorist designated organization. Nasri uses a very dramatic simily to explain the unchangeable nature of Mujahedin. He writes, “a mere change of designation is as absurd as removing a snake from the list of reptiles and expecting it to act as peaceful dove.”[3]

The message that delisting the MKO will send to the public is on the one hand, the fact that you can buy everything in the US. You are able to consider a group a friend or a freedom fighter or a pro-democratic movement rather a terrorist communist cult, just if you are well paid by the group. On the other hand, removing the MKO from the list opens the door for other terrorist group’s lobbying efforts in the US government. ”just imagine what sort of message such laxity could send to both the defenders and violators of international criminal law,” Reza Nasri concludes.

Another side of MKO demonstration
As I mentioned Friday is also the day of Quds annual rally – a day of protest against illegal occupation of Palestinian land and the city of Quds (Jerusalem) by Israel. As the new patron of Mujahedin Khalq the Israel lobby has employed the MKO agents to bring over 5000 people to a counter rally against the Quds rally, according to Iran-Interlink.

An insider of the National Council of Resistance has told Iran-Interlink that some operatives of the group have already arrived in Washington to prepare the ground for the arrival of the other thousands.[4] the MKO’s gathering on Friday will serve the needs of their new Zionist friends besides what it will bring to their own agenda. 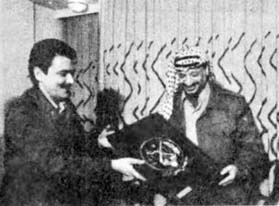 The history never forgets that the Mujahedin Khalq Organization started its struggle as an anti-Zionist, anti-Imperialist movement. Its operatives received military training in PLO camps and Israelis interests, were among their first targets of assassination and bombing during the 1970’s.

You may feel dizzy. No surprise. The history of the MKO is overflowed with controversies.