No excuse to extend military presence of Americans 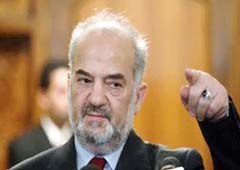 Iraq and the United States will never be extended.

Jaafari, who is the leader of the Iraqi Shiite coalition, made the remarks during an interview with the Mehr News Agency. His remarks were later translated into English.

The U.S. has been left with no excuse to extend its military presence in the country beyond December 2011, and the security agreement will never be extended, he stated.

“Lawsuits have been filed against a number of the members of the terrorist MKO group, and rulings have been issued for them. And it has been emphasized that their presence in Iraq is illegal,” he stated.

“In our view, a political refugee in Iraq, no matter what country he has come from, should not be armed. As a matter of fact, if this person lays down arms, he can live peacefully in Iraq, otherwise he should leave Iraqi soil,” Jaafari added.

The Iraqi government “will never allow MKO members to take up arms against any country, particularly the neighboring countries, including the Islamic Republic of Iran and Turkey,” he said.

On September 20, Iraqi Finance Minister Baqir Jabr Alzubaidi said that Baghdad will put the criminal leaders of the terrorist group on trial before expelling them.
The Iraqi people will never overlook the atrocities that the members of this group have committed, Alzubaidi stated.

Asked about the crackdown on the people of Bahraini, Jaafari said, Iraq has expressed concern over the situation in Bahrain and have called for a compromise to be made between the government and protesters.