A senior advisor to the Iraqi prime minister blasted the US and Europe’s staunch support for the anti-Iran terrorist Mojahedin-e Khalq Organization (MKO), and said the terrorist group should be expelled from Iraq. 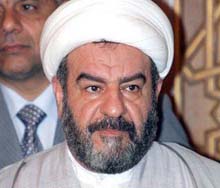 "Legally speaking, the presence of the MKO in Iraq under any title is against the law and they should be expelled from the country," Abdulhalim al-Zahiri said in a meeting with Seyed Mohammad Javad Hasheminejad, the secretary-general of Iran’s Habilian Association – a human rights group formed by the families of 17,000 terror victims in Iran.

Stressing that the US and Europe consider the MKO as a terrorist group, he said that they support the group fervently in a bid to use it as a leverage to pressurize Iran.

He said the MKO have misused the status quo in Iraq to expand their illegal and terrorist activities despite the fact that their main camp in Diyala province is surrounded by the Iraqi troops.

Meantime, earlier media report said that the US is trying to convince Iraqi officials to relocate MKO members within Iraq.

The relocation would be temporary, the official said, with final settlement of the inhabitants in other countries.

That would not include the United States, the official said, "Since US law bars anyone associated with a terrorist organization from settling there".

Dabbaq announced in early April that the cabinet is determined to shut down Camp Ashraf located North of the capital, Baghdad, and disband the terrorist group.

"The council of ministers is committed to the implementation of an earlier decision for disbanding the terrorist group by the end of this year at the latest, and is rigid about the necessity for getting it out of Iraq," the official noted.
Fars News, October 01 2011
http://english.farsnews.com/newstext.php?nn=9007090082