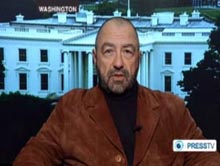 Following the deadly terrorist attack, leading to martyrdom of Iranian prominent scientist, many experts have raised critical questions on the issue of the assassinators identity.

Many experts believe that it could be a joint terrorist assassination attack, carried out by Mossad and MKO, trying to delay the country’s progress in its peaceful nuclear program.

Following is a rough transcription of the interview.

Press TV: What is your evaluation of the report? How do so-called false flags work in the Mossad-Jundullah nexus?

Maloof: Well, thanks for having me. I think that they act as proxies. And Jundollah has been known for some time to be associated with the CIA and FBI In fact their two leaders that were ultimately caught have admitted that they had connections with US law enforcement and intelligence officials.

I might add in addition to Jundollah, you might also want to consider that the MKO [ Mojahedin al Khalq Organization] or the MEK as it is also called, which has been in Iraq for years and which is also against the Iranian regime, also might have been involved as well. They would blend in very well, very easily. So it could be a combination of Jundollah and MEK.

Press TV: It seems that the US and Israel are already engaged in a war with Iran through this particular method in killing scientists that is. So, how far can it go? I mean [can they] kill all the scientists?

How far will they go? I think it is already a subtle war that is underway because they know they cannot invade, successfully, Iran, so they are going to be much more surgical about it and go after those elements that are critical to Iran’s nuclear development program.

Press TV: What image will this give to the rest of the world, I mean the fact that what we are seeing, what is apparent was the fact that they actually cooperate with terrorist organizations, groups which the US claims to be fighting. How contradictory is this?

Maloof: Well, the Jundollah and certainly the MEK have been on the US terrorist list for years. But that doesn’t preclude the US when it suits their national interests to engage and work with elements of these groups. After all, they are anti-Iranian, so they are going to be employed as much as they can and I do know that there has been an effort underway to remove the MEK [MKO] certainly from the US terrorist list.

Press TV: And so, how do you relate this recent terrorist attack in Tehran to this whole story?

In fact, it is my personal view that Iran has every right to enrich, as a signatory to the Nuclear Non Proliferation treaty [NPT].

Press TV: And finally, what can Iran do to pursue the case legally?

Maloof: Well, I think they can undertake maximum exposure to the international organizations, making that very clear and plain that this is illegal; that the United States and Israel are engaged in a subtle engagement of warfare and that they ought to take it to the International Court of Justice and certainly keep and make it public to keep an eye on it, so that the world’s public is viewing this and that it is absolutely wrong.