Links to radical group operating inside Iran a cause for concern

asked if he supported an international, anti-American terrorist organization with a bloody record for killing innocent civilians thousands of times worse than al Qaeda. This “expert on international affairs” claimed he never had heard of them. Then, like a lying politician, he promised: “I’ll take a look at the issue.” Video taken at a town hall meeting in New Hampshire shows Romney quickly waving the issue aside and 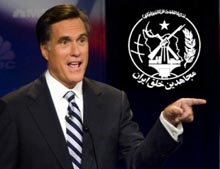 hurrying on to another question.

Romney’s campaign counts on the fact that the public never hears of this group or his campaign’s covert connections to them. Few Americans—besides AFP readers who read about this in the Dec. 16, 2011, edition—have even heard of the fanatical, terrorist group, the Mujahedin-e Khalq (People’s Mujahedin of Iran; MEK or MKO). This is thanks to the big media’s general cover-up, and largely because it is an Israeli asset.

For months independent investigative journalists have asked Romney about his campaign’s ties to the MEK—but he never responds. No wonder, because if the American people ever found out about MEK, and the Romney campaign’s ties to it, they would demand he be tried for treason.

One of Romney’s chief advisers is neocon Mitchell Reiss. Reiss not only heads the 50-plus top neocons that lied America into the Iraq war—but he is also a leader in the stealth campaign for quietly removing MEK from the “Foreign Terrorist Organizations” (FTOs) list.

MEK was one of the first to be put on the FTO list because of its boasting of assassinations of U.S. servicemen, attacks on U.S. diplomats, murders of American citizens and suicide bombings. MEK was the only faction of Iranians who wanted to kill the American hostages in 1979. After the release of the Americans, the MEK went on a rampage and murdered possibly tens of thousands of Iranians in a decade-long terror campaign.

When George H.W. Bush, Donald Rumsfeld, Dick Cheney and other neocons gave germ warfare technology, poison gas and other chemical weapons to former Iraqi leader Saddam Hussein so he would invade Iran, MEK joined Saddam in slaughtering its fellow Iranians.
After Saddam fell, Washington ordered U.S. troops to protect MEK from the wrath of the Iraqis. George W. Bush gave MEK hundreds of millions of taxpayers’ dollars to commit terrorism in Iraq. Much of that money was spent on luxuries by MEK leaders in London and Paris.

MEK has bribed congressmen and other high officials with hundreds of thousands of dollars in speaker’s fees. Aiding and abetting MEK is still illegal. They get around this by using front groups and shells, laundering the money through speaker bureaus, high-dollar public relations outfits and law firms.

Another reason they want off the FTO list is they have thousands of followers in camps in Iraq and are no longer protected by U.S. troops, so they want to bring these trained killers and terrorists here.