While the fifth and latest assassination of an Iranian scientist in broad daylight has Iran pointing the finger at Israel and the United States, with at least the US State Department denying any involvement, there is no evidence yet to determine exactly who was behind the attack.

However, the US State Department complicated what would have otherwise been plausibly denied, by claiming no US involvement “in any kind of act of violence inside Iran.” This is a verified lie. The US has indeed conspired to carry out a campaign of covert violence against Iran and is on record already beginning operations against the Islamic Republic even before Obama came into office. These operations have continued up until present day with the US harboring, arming, funding, training, and providing diplomatic support for a US State Department listed “foreign terrorist organization,” the Mujahedeen e-Khalq (MEK). 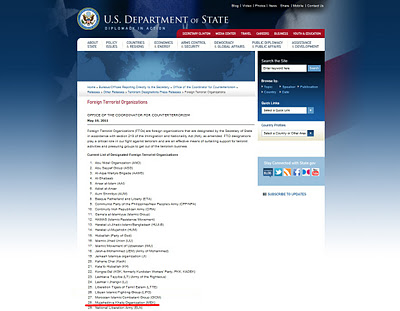 Image: US State Department lists MEK as a “Foreign Terrorist Organization.” This page has since been taken down and replaced with this .pdf list.

Who Is MEK and Why is the US Funding Terror?

The best profile of MEK is given to us by the Fortune 500 funded Brookings Institution in their report, “Which Path to Persia?” In their report, they also openly conspire to use what is an admitted terrorist organization as a “US proxy” (emphasis added):

“Perhaps the most prominent (and certainly the most controversial) opposition group that has attracted attention as a potential U.S. proxy is the NCRI (National Council of Resistance of Iran), the political movement established by the MEK (Mujahedin-e Khalq). Critics believe the group to be undemocratic and unpopular, and indeed anti-American.

Undeniably, the group has conducted terrorist attacks — often excused by the MEK’s advocates because they are directed against the Iranian government. For example, in 1981, the group bombed the headquarters of the Islamic Republic Party, which was then the clerical leadership’s main political organization, killing an estimated 70 senior officials. More recently, the group has claimed credit for over a dozen mortar attacks, assassinations, and other assaults on Iranian civilian and military targets between 1998 and 2001. At the very least, to work more closely with the group (at least in an overt manner), Washington would need to remove it from the list of foreign terrorist organizations.”

It should be noted that both the Brookings Institution and the RAND Corporation note that Iran, even upon possessing nuclear weapons is unlikely to use them or proliferate them to non-state actors. This is based on observations made of Iran’s long standing chemical and biological arsenals that have been under strict control for decades.

There is also recognition of the fact that despite the propaganda found throughout the corporate-media, Iran does indeed value self-preservation and conducts its foreign-policy aggressively but not irrationally. The real danger of Iran’s possession of nuclear weapons, as stated by the Brookings Institution (page 24 & 25), is that they may attempt to then subvert American allies and emboldened by the inability for the US to retaliate, allow them to overturn the Middle Eastern status quo, as currently dictated by Wall Street and London. In other words, it is not American or Israeli national security that is at risk, but rather their unchecked and unwarranted hegemony throughout the region.

It then seems that US support for MEK becomes all the more indefensible when one realizes it is for extraterritorial hegemony, not national security that America is sponsoring bonafide terrorists.

As revealed in Seymour Hersh’s 2008 New Yorker article “Preparing the Battlefield,” not only has MEK been considered for their role as a possible proxy, but the US has already begun arming and financing them to wage war inside Iran:

“The M.E.K. has been on the State Department’s terrorist list for more than a decade, yet in recent years the group has received arms and intelligence, directly or indirectly, from the United States. Some of the newly authorized covert funds, the Pentagon consultant told me, may well end up in M.E.K. coffers. “The new task force will work with the M.E.K. The Administration is desperate for results.” He added, “The M.E.K. has no C.P.A. auditing the books, and its leaders are thought to have been lining their pockets for years. If people only knew what the M.E.K. is getting, and how much is going to its bank accounts—and yet it is almost useless for the purposes the Administration intends.”

Seymore Hersh in an NPR interview, also claims that select MEK members have already received training in the US.

Incredibly, US forces in Iraq had provided MEK’s main camp with security, and with the recent “withdrawal” of US troops from Iraq, the US State Department and even the UN have been scrambling to find a new safe haven for the US listed terrorist organization. Even more unimaginable is the fact that many of the foremost fearmongers and proponents of the “War on Terror” are engaged in desperate lobbying efforts to get MEK delisted. In October of 2011, a full page ad was taken out in the Washington Post on MEK’s behalf. 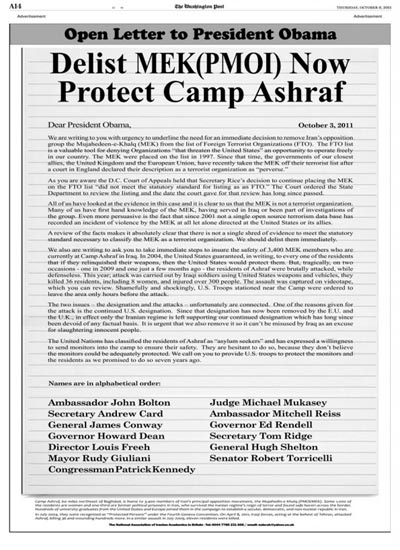 Image: Full-page treason – US politicians, many the most prominent proponents of the “War on Terror,” appeal to the President of the United States to delist MEK as a terrorist organization. While hand-wringing humanitarian concerns are cited, what the ad fails to mention is that MEK has long been sought after to serve as an armed US-proxy to be turned on Iran and carry out a campaign of terror, as stated clearly in the Brookings Institution “Which Path to Persia?” report. (click image to enlarge)
….

Among those signing the statement made in the ad were John Bolton, Howard Dean, Rudy Giuliani, Ed Rendell, and Tom Ridge. When reading the statement, it must be kept in mind that the Brookings Institution already confirmed that MEK was a terrorist organization and that it had verifiably killed US military personal and civilians. Also keep in mind that Brookings admitted that MEK’s targets in Iran included political and civilian targets. With MEK’s specialty being among other things, assassinations, they are also likely suspects behind the recent spat of targeted killings of Iranian scientists.

The Brookings Institution report, “Which Path to Persia?” confirms that indeed US policy makers have conspired to use MEK as an armed-proxy to commit acts of violence inside Iran, while Seymour Hersh’s 2008 New Yorker article “Preparing the Battlefield confirmed that MEK had already begun receiving weapons, training, and financing to begin their campaign. Foreign Policy’s most recent article, “State Department scrambling to move the MEK — to a former U.S. military base?“confirms that MEK is still receiving considerable support from the US to this very day.

The US State Department’s recent claim that it is not involved “in any kind of act of violence inside Iran,” is clearly false. The US is committing acts of violence inside of Iran to the extent of using not only special forces as noted by Hersh’s 2008 article, but also by using terrorists with a long history of attacking political and civilian targets in Iran.