Several hundred Iranian exiles were travelling to a UN-approved site near Baghdad on Saturday after leaving Camp Ashraf, where Iranian opposition members have been 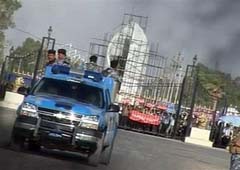 The move is part of a December 25 deal between the UN and Iraq, which was reached after extensive talks, under which around 3,400 Iranians opposed to the regime in Tehran will be moved to a new location called Camp Liberty, as part of a process that aims to see them resettled outside Iraq.

Three hundred and ninety seven exiles departed in 18 buses beginning about 1:30 am on Saturday (2230 GMT on Friday), escorted by Iraqi security forces, Behzad Saffari, the legal adviser for residents of the camp, told AFP by telephone.

The departing exiles and their belongings were searched prior to their departure in a lengthy process that began around 2:00 pm (1100 GMT) on Friday, and continued until 1:15 am on Saturday (2215 GMT on Friday), said Saffari, who was travelling with the group to Camp Liberty, near Baghdad airport.

Iraq had previously aimed to close Camp Ashraf in Diyala province, which now-executed dictator Saddam Hussein allowed the People’s Mujahedeen Organisation of Iran (PMOI) to set up during his 1980-88 war with Iran, by the end of the year.

But Iraqi premier Nuri al-Maliki said on December 21 that his government had agreed to extend the deadline to April, and signed the deal with the UN on moving the exiles a few days later.

The National Council of Resistence of Iran, an umbrella group that includes the PMOI, has complained about the conditions at Camp Liberty, and called for Iraqi police to be withdrawn from the camp before additional exiles move there.

The left-wing PMOI was founded in 1960s to oppose the shah of Iran, but took up arms against Iran’s new clerical rulers after the Islamic revolution in 1979. It said in 2001 that it had renounced violence.

Spokesman Shahriar Kia has said that the PMOI is "seeking a democratic change in Iran."

The US State Department has blacklisted the PMOI as a terrorist organisation since 1997, and says that members of the group carried out a large number of attacks over several decades against Iranian targets, and also against Americans.

The PMOI strongly opposes the terrorist designation and is seeking to have it lifted in the United States as it has been in Europe.

In a May 2005 report, Human Rights Watch cited former PMOI members as having "reported abuses ranging from detention and persecution of ordinary members wishing to leave the organization, to lengthy solitary confinements, severe beatings, and torture of dissident members."

An October 2005 US diplomatic cable from Baghdad released by whistleblower website Wikileaks discussed the cases of two people of Iranian origin who had lived in Germany, saying that after they arrived at Camp Ashraf in 1999, their travel documents were confiscated and they were told they could not leave.

The cable said that a claim by one of the two "that Ashraf residents found planning to depart were punished and threatened with death is corroborated by numerous former residents."

Camp Ashraf was disarmed following the US-led invasion of Iraq in 2003 and came under US military protection, but American forces handed over security responsibilities for the site to the Baghdad authorities in January 2009.

Iraqi security forces raided Camp Ashraf in late July 2009, leading to clashes in which 11 residents of the camp were said to have been killed and several hundred wounded.

Camp Ashraf has been back in the spotlight since a controversial April 2011 raid by Iraqi security forces left at least 34 people dead and scores injured.