When Will We throw This Bum out?
The Obama-al-Qaeda-MEK Connection

leading terrorist organizations—al-Qaeda and the Mujahideen e-Khalq (MEK)—in his zeal to overthrow the present governments in Syria and Iran. The Obama-al-Qaeda marriage of convenience is particularly deep and it centers 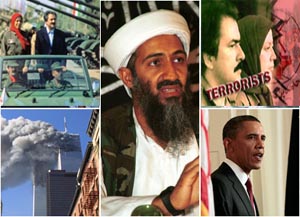 on the drive to overthrow the government of Bashar Assad in Damascus, through an armed opposition.

U.S. intelligence agencies are aware that the so-called Free Syrian Army (FSA) has no actual military capabilities inside Syria, and consists largely of a group of defectors from the Syrian Army who are safe-housed on military bases inside Turkey. All of the significant military actions targeted at the Syrian government have been carried out by al-Qaeda terrorists, who have infiltrated the country from Iraq. The suicide bombings in Damascus and Aleppo, the assassinations of Syrian government and military officials, and the sabotage of pipelines and other infrastructure have all been carried out by al-Qaeda. Despite widespread evidence in the hands of U.S. intelligence agencies, President Obama continues to join hands with the new al-Qaeda head, Ayman al-Zawaheri, in calling for the violent removal of President Assad from power.

The idea that the President of the United States is so blatantly in bed with the terrorists who carried out the attacks on the World Trade Center and Pentagon on Sept. 11, 2001 should be sufficient grounds for his immediate removal from office, under the impeachment provisions of the U.S. Constitution or Section 4 of the Twenty-fifth Amendment. Last year, following the U.S. Navy SEAL Team killing of al-Qaeda leader Osama bin-Laden, President Obama did cartwheels to claim credit for the act. Now, he is allied with the very same 9/11 perpetrators in pushing for a war in the Persian Gulf that will rapidly expand into a global thermonuclear confrontation with Russia and China.

The British Role
As well-documented in Executive Intelligence Review, the al-Qaeda attacks of 9/11 were carried out with the full support of the Anglo-Saudi Al Yamamah apparatus. Under the al-Yamamah oil-for-arms deal, launched in 1985 and continued through to the present, British intelligence and the Saudis created a string of offshore covert operations funds, which directly financed the 9/11 attacks. Al-Yamamah funds, in excess of $2 billion, were funneled to Saudi Prince Bandar bin-Sultan, and at least $50,000 of those funds went to the San Diego-based team of 9/11 hijackers. A Joint Congressional Select Committee, probing the 9/11 attacks, established evidence of the Bandar-al-Qaeda funding, but the 28-page chapter detailing this evidence was suppressed by the George W. Bush White House. At the start of his administration, President Obama promised family members of the 9/11 victims that he would release the 28 pages, but he never kept his promise, and moved to further suppress the evidence of al-Yamamah angle on the attacks, thus protecting his British masters along with the Saudi Royals.

To this day, former Senator Bob Graham (D-Fla.), who co-chaired the Congressional probe, insists that the cover-up of the Saudi Monarchy’s complicity in the attacks must be exposed publicly.

President Obama’s embrace of the 9/11 terrorists, after the fact, constitutes a scandal of enormous proportions for this Administration, and underscores further the hypocrisy of Obamas efforts to exploit the bin-Laden assassination, while he colludes with the remnants of al-Qaeda.

The same is true of the President’s collusion with the Mujahideen e-Khalq, an Iranian terrorist group that has been on the U.S. State Departments list of Foreign Terrorist Organizations since its inception in 1997. MEK assassinated a number of U.S. military personnel in Iran in the 1970s, actively participated in the 1979 Iranian Revolution, and then fled to Iraq and allied with Saddam Hussein, after they were purged from the Islamic Republic leadership. In recent weeks, MEK has been linked to the assassinations of Iranian scientists. This week, the Bangkok Post revealed that Thai authorities believe that MEK terrorists were behind foiled attempts to attack Israeli officials. Those attacks were loudly blamed on the Iranian government, and fed the drive to launch military action against Iran.

While the Obama Administration has attempted to keep a distance from the assassinations and bombings and other acts of sabotage inside Iran over the past two years, MEK has been protected by U.S. military forces at Camp Ashraf inside Iraq, ever since the U.S. invasion of that country in March 2003.

The MEK and the Warped Nature of the Iran Debate

The group assassinated Iran’s scientists wants to be delisted