The people who are familiar with the characteristics of cults will easily spot one when they encounter it. MKO is not an exception when you come upon the cult leader’s latest remarks and 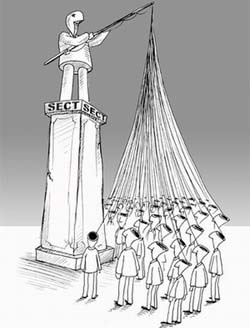 demands in a struggle to preserve the whole structure of the cult. Recognized as a dangerous terrorist cult still on the US’s FTO’s list, MKO is now facing a crisis of being forced to leave Iraq, where it was given a safe haven at the time of the country’s fallen dictator with whom it had formed a close collaboration to act as his mercenaries.

According to a MoU signed by the Iraqi Government, UN and MKO, and asserted by the UN Assistance Mission for Iraq (UNAMI), all the residents in the long occupied military base of MKO, Camp Ashraf, have to be transferred to a Temporary Transit Location TTL near Baghdad’s airport to be processed within two months to be transferred to third countries. The UN’s refugee agency (UNHCR) is tasked with immediate determination of the residents’ refugee status as soon as they are stationed in TTL. But there is a big problem: UNHCR can only process refugee determination and seeking for the residents’ asylum in other countries one by one and individually. As the UNHCR commissioner, Antonio Gutierrez, stressed in a meeting with Iraqi Minister of Human Rights, “The commissioner doesn’t grant asylum to groups and organizations, rather asylum is granted to individuals under the condition of abandoning violence”.

That is where the problem arises. MKO is a cult and dispersion of the members under any cause means total disintegration of the cult. A cult and its leaders seek to isolate his/her followers from outsiders to ensure that the followers will only hear the cult’s propaganda. The isolation from influences outside protects the cult’s internalized belief system and keeps them away from the outside critical thinking that threatens the cult’s integrity. And MKO has since long been engaged in such cultist activities keeping the members inside the heavily controlled, physically and psychologically, military camp of Ashraf.

As the TTL is planned to be under full control of the Iraqi Government and UNHCR, absolutely in contrast to MKO’s complete control over Camp Ashraf, one of the options to safeguard the integrity of the cult is a quest for any location anywhere to transfer the members all together. Now you can well understand why Maryam Rajavi, the cult’s acting surrogate for her absent husband, appealed to Secretary Clinton, the UN Secretary General and other western personalities demanding that the residents be relocated temporarily to a site near the Jordanian border instead of being relocated to Temporary Transit Location TTL.

Interestingly, the camp she demands for is a piece of bare desert that was set up as a tent camp to accommodate asylum seekers after the US invasion of Iraq in 2003. And of course, she announces to accept all the expenses of the relocation and other expenses such as “flattening the land, installing tents, providing logistical support, services”, as she proposes. For sure, the world will not tolerate formation of another Jamestown colony, this time on Iraq-Jordan border. A global move deems necessary to accomplish the relocation of the residents to break the spell of the cult and to save the spellbound members by exposing them to the reality of the outside world, where their families have been long waiting for them.