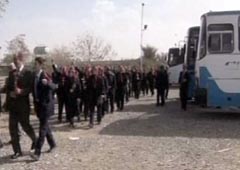 Mojahedin Khalq Organization (MKO) from Camp New Iraq, Camp Ashraf, and transferred them to a Temporary Transit Location (TTL) near Baghdad. Unlike the four past groups transferred, overwhelming majority of this convoy were women, 350 out of 416.

In a bid to escape from any accusation of refusing to cooperate to peacefully speed up the process of evacuation, MKO announced it “showed utmost cooperation and agreed to the transfer upon the requests of Mrs. Maryam Rajavi”. But the unnecessary interval of 19 days between the transfer of the fourth and the fifth group was mainly because of MKO’s providing of unreasonable impediments and invention of excuses. In its latest statement delivered a few days prior to transfer, MKO offered new suggestions which clearly indicated that it was walking on a path of delaying the process of relocation and prolonging its stay at Ashraf.

The suggestion it intended to impose on the Iraqi Government stressed on moving a big bulk of utilities and instruments from Ashraf to TTL and selling the unmovable at a big price. However, the Iraqi Government disregarded MKO offers and disappointed it in what the group refers to as “two weeks of negotiations and repeatedly changing the draft agreement with Ambassador Kobler”. The Iraqi Government seems to have learned how to deal with petulant demands of the group and the utility vehicles MKO had prepared to take were stopped at the gate and returned back to Ashraf. Like the previous convoys supervised by the UN monitors nothing but the personal belongings, as stipulated in the MoU signed between the Iraqi Government and the UN, were permitted to pass the inspectors at the gate.

The agreement reached at the present is relocation of Ashraf residents to TTL. The question of properties and holdings MKO claim to possess and insists to take is not so simple an issue to be negotiated simultaneous with the relocation process. The humanitarian issue of relocation is different from the material assets dispute.