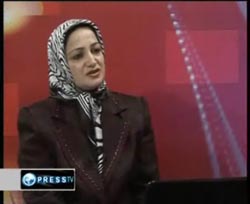 Arabia and Israel, emphasizing MKO’s role in the suppression and massacre of Iraqis under the former Baath regime.

Speaking in an exclusive interview with Ashraf News website in the Iraqi capital Baghdad on Saturday, Maryam Sanjabi said there is evidence about the relations and cooperation between the MKO and the Saudi kingdom.

She added that the group has used the tactic of establishing relations with Jordanian lawmakers in order to expand their activities in Jordan with the help of Riyadh.

She also called on the remaining MKO members in camp Liberty in Iraq to think rationally and take advantage of the Iraqi government and UN decisions about their re-settlement in another country.

MKO members have now a better chance of escaping in the wake of their transfer from Camp New Iraq, formerly known as Camp Ashraf, situated about 120 kilometers (74 miles) west of the border with Iran, to the Camp Liberty, the former MKO leadership council member said.

The group fled to Iraq in 1986, where it enjoyed the support of Iraq’s executed dictator Saddam Hussein, and set up its camp near the Iranian border.

The organization is known to have cooperated with Saddam in suppressing the 1991 uprisings in southern Iraq and carrying out the massacre of Iraqi Kurds. The group has also carried out numerous acts of violence against Iranian civilians and government officials.