While the Islamic republic of Iran and Saudi Arabia are at a high level of tensions that may end to a war, the Mujahedin Khalq Organization (MKO) cannot conceal its pleasure of a disturbed relationship between Iran and its neighbors. 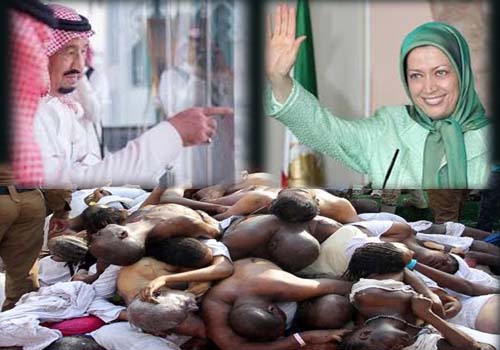 Once, the MKO leader Massoud Rajavi took a lot of advantages from the war between Iran and Iraq although he lost his least support among the Iranian public due to siding with their aggressive enemy. However, the MKO leaders have no way out except resorting to the old tool which is siding with the enemy of Iranian nation.

Having been disappointed with the nuclear deal, and therefore, a normalized Iran-West relationship, they were lying in ambush for another troubled Iranian relations with foreign countries. The disaster of Mina gave them the opportunity.

The group’s propaganda media garner their headlines with sponsorship for Saudi Arabia. In case of the heartbreaking tragedy of this year’s pilgrimage, the MKO leader and propaganda predictably disregarded the loss of a large number of their country-men, instead they played the part of attorney of the Saudis.  Maryam Rajavi usually sends message of condolences for the least earthquake that shakes Iran –even if there is no death casualty—and always put the fault of casualties of the quake on the Iranian Government’s mismanagement but she never offers sympathy to the large number of survivors of the Mina disaster that was the direct result of mismanagement of the government of Saudi Arabia that is supposed to manage the most important annual event of the world of Islam.

The MKO’s propaganda covers the clashes in Yemen as if Islamic Republic is bombing civilians rather than Saudi Arabia! Yemen has turned into a humanitarian disaster, where thousands of bombs are being dropped, 1.5 million people are displaced and more than 90% of the population is in need of assistance, according to the Guardian. The Guardian views Yemen’s crisis as “the forgotten war”. But why the Western media forget it because “the US is one of the primary causes of the problem”. This reason is exactly true for the MKO media because Saudi Arabia is one of their military and financial sponsors as well as the US and Israel.

The West is actively assisting the Saudi monarchy while the country indiscriminately kills thousands of civilians in Yemen in what amounts to war crimes by almost anyone’s definition. To obey its western masters and to flatter its main sponsor in the region the MKO turns blind eye to the most horrific atrocities against humanity.  However, it claims to advocate human rights and democracy for the Iranian people.

What counts for the MKO to make allies, is only money.  As far as the group is financially supported by Saudis, the MKO media serves as their “fan Club”.  This is one of many accounts of the Saudi’s sponsorship for the MKO that Press TV reported:

“A Mujahedin-e Khalq Organization defector says the terrorist group receives funding from Saudi Arabia and Israel, emphasizing MKO’s role in the suppression and massacre of Iraqis under the former Baath regime.  Speaking in an exclusive interview with Ashraf News website in the Iraqi capital Baghdad on Saturday, Maryam Sanjabi said there is evidence about the relations and cooperation between the MKO and the Saudi kingdom. She added that the group has used the tactic of establishing relations with Jordanian lawmakers in order to expand their activities in Jordan with the help of Riyadh. She also called on the remaining MKO members in camp Liberty in Iraq to think rationally and take advantage of the Iraqi government and UN decisions about their re-settlement in another country.  MKO members have now a better chance of escaping in the wake of their transfer from Camp New Iraq, formerly known as Camp Ashraf, situated about 120 kilometers (74 miles) west of the border with Iran, to the Camp Liberty, the former MKO leadership council member said. The group fled to Iraq in 1986, where it enjoyed the support of Iraq’s executed dictator Saddam Hussein, and set up its camp near the Iranian border. The organization is known to have cooperated with Saddam in suppressing the 1991 uprisings in southern Iraq and carrying out the massacre of Iraqi Kurds. The group has also carried out numerous acts of violence against Iranian civilians and government officials.”

[1] The Guardian, The Yemen crisis is partly our fault. We can no longer facilitate this war, 5 October 2015