OK, my title is a little inflammatory. But it is the kind of thing that Newt Gingrich has been wont to say in the past about President Obama and anyone else he deems as lily-livered in the war

against terrorism. Now, according to TalkingPointsMemo, the Atlantic, and other outlets, it appears that the former Speaker has himself been lauding an organization that the State Department continues to view as a terrorist one, namely, the Iranian MEK. He’s calling it a "massive, world-wide movement for liberation in Iran."

Strong words. But then again, conservatives always have been prone to proclaim that the State Department consists of a bunch of appeasement-minded wussbags who don’t understand America’s true national interests. But in this case, the State Department more than likely has it right.

Paul Pillar, who blogs regularly for TNI, knows a lot more about the MEK than I do or probably 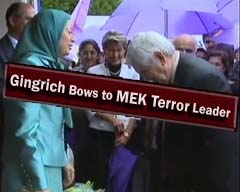 ever will. As near as I can tell, he thinks it is very bad news indeed, an organization that America would do well to keep at a distance–an organization that the BBC says some western officials regard as nothing less than a coercive cult. But what is common knowledge is enough to given any sensible observer pause. So I confess to finding it more than a little disturbing that Gingrich would embrace this dubious organization made up of Iranian exiles with such zeal. He attended a rally for it last Sunday in Paris, which is located in France (a country that conservatives in the Gingrich mold usually denounce as consisting of a bunch of craven appeasers). But Gingrich’s neocon zeal for the would-be liberators of Iran knows no bounds. The MEK may have had a close relationship with Saddam Hussein’s Iraq and even supported it during the Iran-Iraq war. None of this, however, seems to faze Gingrich.

There are, however, several problems with Gingrich’s bluster. One is that America is already taking an extremely hawkish stance toward Iran. President Obama has launched a war in all but name against Iran. Whether it will turn into a shooting one is something that probably won’t be apparent until his second term. Another problem with Ginrich’s bloviation is that we don’t really know enough about the MEK to hail it as a bunch of freedom fighters. Conservatives did that with regularity during the cold war–Jonas Savimbi in Angola or the contras in Nicaragua. And, by the way, what about Ahmed Chalabi, who was hailed as the next liberator of Iraq? The results, to put it politely, were somewhat dubious. America has a history of getting into bed with characters who profess dedication to liberty and the pursuit of happiness. But their own records, particularly when it comes to human rights and democracy, tend to be unhappy ones.

Another problem is that Gingrich is essentially freelancing. He is spouting off about something that he does not know much about. Now there isn’t much new about that. This is, by and large, what Gingrich does. He expectorates like a gushing fire hydrant in the middle of the summer about any and all sundry topics. Even during the primary season, it was almost impossible to get him to shut up, no matter how woeful his electoral numbers might have been. He lives to talk and talks to live. A silent Gingrich is almost as inconceivable as a spontaneous Mitt Romney.

Gingrich’s remarks in Paris won’t dent his image as it has already been dented. How influential Gingrich is at this point may also be questioned. But his remarks are symptomatic of a broader problem among his adherents, which is to say that they are not particularly choosy about whom they choose to support or ally themselves with in the fight against dictators and terror. Perhaps Gingrich might respond that you can’t always be persnickety about your allies when battling the likes of the Iranian mullahs. But he seems to be hailing them as the George Washington’s of the Middle East. That’s ludicrous. It’s also a development that you might even be justified in labeling terrifying if the MEK really were to become the new pet cause of crusading conservatives. What Gingrich is courting is not the liberation of Iran but a replay of the Iraq War. That is a path that no American administration should follow.