Retired US politicians, generals, and officials have been lobbying on behalf of the Iranian group MEK, listed as a terrorist group by the State Department.

Some of the biggest names in American politics and foreign policy have been accepting money from a State Department designated terrorist organization in recent years and lobbying the US government to bring the group in from the cold.

A scandal? Hardly. That famous generals, politicians, and other retired officials have supported the Mojahedin-e Khalq (MEK) has been public knowledge for some time. But their freedom to act on behalf of a group that has murdered Americans, and sought to create an amalgam of Islam and Marxism to take over Iran after the overthrow of the Shah in 1979, has nevertheless been striking. The internet is filled with their speeches, many of which were paid for with hefty fees, praising the group’s Maryam Rajavi, the self-styled "president" of Iran.

That’s just a brief sampling (the Monitor’s Scott Peterson did an extensive investigation into the MEK’s American supporters last year). US citizens aren’t supposed to be helping out groups designated as terrorists by the government, but that’s not how it works in this case.

Consider by contrast the Texas-based Holy Land Foundation. The group was prosecuted in 2007 for funneling money to Hamas, the Palestinian Islamist group that is also on the State Department’s terror list. The charity sought to defend itself by saying that it was only providing humanitarian aid to the Gaza Strip, which is governed by Hamas. The prosecution and the jury didn’t see it that way, however, and five members of Holy Land were convicted, with two of the officials given 65-year jail terms.

While ex-US officials are receiving money from the MEK, rather than providing it, the tolerance of the close work with the group has been a Washington oddity for some time. There’s some "enemy of my enemy is my friend" logic around this (the MEK hates the current Iranian regime), and some of its advocates view it is a government in waiting for Iran (much as they viewed Ahmad Chalabi and the Iraqi National Congress a decade ago). But the group has limited support inside Iran, and the Green Movement views the MEK with as much suspicion as the Iranian government does.

Now, a growing number of questions are being asked about the activism for the MEK.

A Washington Post article last week wonders if the officials could be prosecuted based on the Foreign Agent’s Registration Act (FARA), which requires US citizens lobbying for foreign powers in the US to disclose their roles and officially register with the government. The article quotes David Cole, a scholar of constitutional law at Georgetown, as saying FARA should probably apply to the friends of the MEK. And continues:

Federal lobbying law defines a foreign “agent” as someone who acts “at the order, request, or under the direction or control, of a foreign principal, or of a person any of whose activities are directly or indirectly supervised, directed, controlled, financed, or subsidized in whole or in part by a foreign principal.” It covers activities that include acting as a publicity agency or political consultant or representing the interests of the foreign group “before any agency or official of the government of the United States.”

“The only defense would be if you can claim that you’re doing it on your own, unpaid,” said a retired senior U.S. official and expert on lobbying law, who spoke on the condition of anonymity to discuss hypothetical cases covered by the statute. “But if you’re getting money from the same group to make speeches, it’s pretty hard to make the case.”

There have been just the slightest stirrings of legal action recently. In June, NBC News cited unnamed sources alleging that "speaking firms representing ex-FBI Director Louis Freeh and former chairman of the Joint Chiefs of Staff Gen. Hugh Shelton have received federal subpoenas as part of an expanding investigation into the source of payments to former top government officials who have publicly advocated removing" the MEK from the State terrorist list. "The investigation, being conducted by the Treasury Department, is focused on whether the former officials may have received funding, directly or indirectly, from the People’s Mujahedin of Iran, or MEK, thereby violating longstanding federal law barring financial dealings with terrorist groups."
The article cited an "Obama administration official" (unnamed, of course) as confirming the probe.

Will any of this lead anywhere? Probably not. It’s hardly news that US law is applied unevenly when it comes to lobbying and connected retired officials. As for the MEK coming off the terrorist list? They remain there today as much as anything to avoid complicating negotiations over Iran’s nuclear program, with many US officials concerned that a positive gesture to the group would do more harm than good to US interests. The status quo seems likely to prevail, at least under this administration.

Former presidential hopeful Newt Gingrich is one of the MEK and Ms. Rajavi’s greatest admirers, and made the case for her group at its annual conference in France this June, which was attended by a passel of former US officials.

Mr. Gingrich referred to the MEK leader as "President" Rajavi, and told her enthusiastic supporters he was wowed by one of her recent speeches.

He said he hoped "that some people in the State Department might see the reality that this is a massive, worldwide movement for liberty in Iran and not anything like the State Department’s descriptions and I think what you did yesterday was historic and extraordinary and needs to be driven home so that everybody that makes foreign policy decisions in the United States understands just how big this movement is getting … and how bipartisan the American support for it is."

It’s been a very long time since the MEK has carried out a terrorist attack, and it hasn’t murdered a US citizen since the mid-1970s, when they killed two US officers attached to the US embassy in Tehran and four American contractors working in Iran. But the group worked closely with Saddam Hussein during his war with Iran in the 1980s, and was involved in the crackdown against his Kurdish and other domestic political opponents.

It retains an unsavory, cult-like reputation in many circles. Camp Ashraf in Iraq, its base of operations when the MEK was in business under Saddam Hussein, was for many years controlled entirely by the group. Former members have complained of being ordered to dissolve their marriages (because they distracted them from supporting Rajavi and her husband), to give up their personal property to the group, and of being physically prevented from leaving the organization by her loyalists.

Newt Gingrich’s bow to Rajavi was more than a little ironic. While the gesture, as it generally is, was gracious, he hasn’t been shy about making politics over other people’s body posture in the pass. When he was still running for president in March, Gingrich released an ad attacking Obama for bowing to the king of Saudi Arabia. 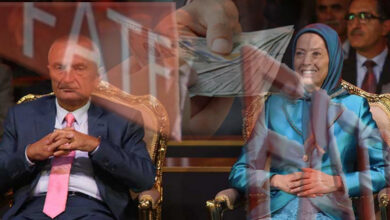 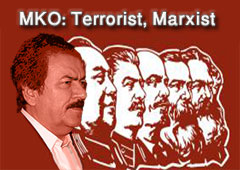 MKO and Grasping for Support in a Very Wrong Way