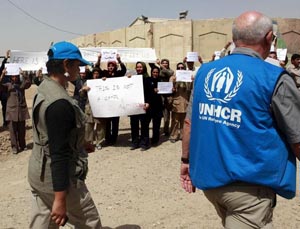 home of an Iranian exile opposition group that has a long-running feud with Baghdad, winning from the envoys cautious praise of the conditions there.

The Mujahedeen-e-Khalq opposed the move to Camp Liberty, a former U.S. base on the outskirts of Baghdad, from another camp in Iraq. They say it is an intolerable prison. Iraq says that it is up to international standards.

The back-and-forth bickering feeds into a wider, decade-long dispute between the MEK and Iraq over the fate of the former guerrilla movement. Iraq considers the MEK to be terrorists and wants them to leave the country. The MEK, also called the People’s Mujahedeen of Iran, wants to move back to their old home at Camp Ashraf northeast of the capital.

Foreign diplomats who visited the dusty complex of former U.S housing containers described the conditions as acceptable. Some said the conditions there looked good compared to other refugee camps.

“I wouldn’t choose to live here, but when we talk about refugees … and what their living conditions are all over the world, this should be considered exceptional,” said Ramon Molina, the Spanish Embassy’s deputy chief of mission.

“It is not very good, but it is not bad also, said Pakistani diplomat Saif Khwaja. “The people who are living here are not from Iraq, and the Iraqi government is bearing the burden of these people.”

The MEK complains they are not allowed to leave and they live without reliable electricity, air condition or water supplies.

“This is not a place to live in. This is not a camp. This is only a prison,” said Liberty resident Homa Roboby, 28. “They are trying to make a life here that is intolerable.”

The MEK is an opposition group to Tehran’s clerical regime. Several thousand of its members were given sanctuary in Iraq by dictator Saddam Hussein. But the Shiite-led government in Baghdad, which is bolstering its ties with Iran, says its members are living in Iraq illegally.

The group is also designated as a terrorist organization by the United States but Washington is currently weighing whether to take them off the list — a decision that will be made in upcoming weeks.

Camp Liberty was designed as a compromise way-station for the U.N. to speed the exiles out of Iraq peacefully. Iraqi security forces have launched two deadly raids since 2009 on the MEK’s longtime home at Camp Ashraf, an inclusive mini-city that the exiles never wanted to leave.

At Liberty, the exiles live in cramped portable housing units left behind by the U.S. military, which occupied the base until it withdrew its troops from Iraq last December. They receive medical attention in a former first aid station. And they eat in a former U.S. dining hall complete with flat-screen TVs that looks very much like how the military left it — with the addition of fresh flowers on tables.

A small patch of yellow sunflowers was planted outside the dining hall, and twinkly lights were strung around posts and from the ceilings in an attempt to brighten up an area that has been dingy if sufficient for inhabitants long before the MEK arrived.

Most of the exiles wore loose clothes in khaki and other muted solid colors, and swarmed the visitors with their grievances. “Message fully understood,” one British diplomat said repeatedly.

The Associated Press and Iraq’s state-run TV were also on the tour in the first time the government has allowed journalists inside Liberty since the MEK began moving there earlier this year.

The exiles’ local leader, Abbas Davari, called the camp “dilapidated” and complained that the Iraqi government has delayed the MEK from moving generators to Liberty from Ashraf, and stymied construction of a new water treatment system.

Gorges Bakoos, who is overseeing the issue for the government, said officials are trying to solve both problems. In the meantime, he said, each exile receives at least 200 liters of water every day, above the U.N. standard of 120 daily liters per refugee. And he said residents already get electricity around the clock — unlike most Iraqis who only get a few hours each day.

The exiles denied that. “In front of you, they say one thing, but once you go — no way,” said Youssef Mahoozi, 51, who lived at Ashraf for 25 years before moving to Liberty six months ago.

The next group of exiles will move within days from Ashraf to Liberty, where U.N. will process their refugee applications and try to find counties to accept them. After that, an estimated 200 will remain at Ashraf for a few more weeks as they try to sell property left behind to traders.

The U.N. has interviewed about 90 Liberty residents but has yet to find any countries that will take them. “We are in dire need of countries coming forward to offer their help,” Gyorgy Busztin, deputy U.N. envoy to Iraq, told the diplomats.

BY Lara Jakes of AP

US to delist MEK/MKO? Who cares 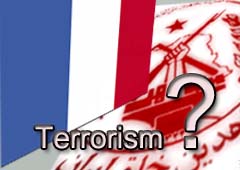 French Assembly, Why did you invite Maryam Rajavi? 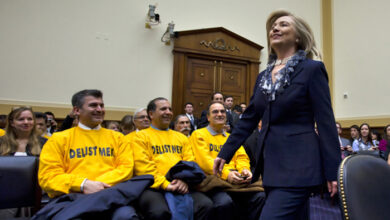