From the initiation of MKO’s armed warfare in mid-1981 until the end of the same year, the death toll of its terrorist operations rose to 338

A Point to Underline

An overlooked point increasing the complexity of the terrorist bombing on August 30 is that majority of the authorities having a role in undertaking investigations into the case and seeking prosecution of the elements have become the victims of terrorism themselves. Just after the explosion, the presidential council comprising Hojjat-al-Islam Rafsanjani and the Chief Justice Abdolkarim Moussavi Ardebili appointed the Prosecutor General Ayatollah Rabbani Amlashi to investigate the case. A few days later, he announced the result; the terrorist perpetrator had been identified to be Massooud Keshmiri. An assassination attempt was conducted on Ayatollah Amlashi by MKO and although he escaped the death, he was later assassinated by another violent group. 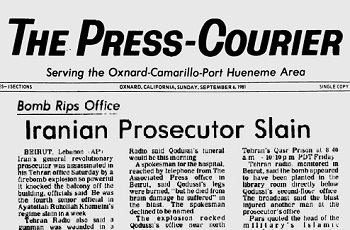 Ayatollah Ali Qodussi and Asaddullah Lajevardi were other involved authorities that were targeted by MKO. Ayatollah Ali Qodussi, the attorney general, was leading an investigation into the explosion at prime minister’s office. Just 6 days after the explosion, on 5 September, an incendiary bomb blasted at his office that led to his death. Asaddullah Lajevardi, a former director of Tehran’s Evin prison and public prosecutor, was assassinated at a time when he had been retired. But he was targeted by MKO because he was suggesting and engaged in a struggle to reopen the case of MKO’s bombing atrocities

A Brief Report of MKO’s terrorist Operations in 1981

From the initiation of MKO’s armed warfare in mid-1981 until the end of the same year, the death toll of its terrorist operations rose to 338 according to its own published reports. The operations can be classified under three categories: 1. Bomb attacks against official and public targets and assassinations of authorities, 2. Orchestrating violent and riotous demonstrations, 3. Targeting civilians. The followings are a record of MKO’s major and significant terrorist and violent activities within a 6 month span.

1. Bomb attacks against official and public targets and assassinations of authorities

June 1981: A bomb was blasted in an attempt to assassinate Ayatollah Khamenei, Tehran’s leader of Friday Prayer at the time.

August 1981: Assassination of Hassan Ayat, a member of Assembly of Experts for Constitution and a Member of Parliament.

September 1981: Bomb explosion at the central building of the Prosecutor General of the Revolution killed Ayatollah Ali Qodussi

October 1981: A bomb blast on Nassir Khusrow Street in Tehran crashed down a hotel and many houses and shops and many civilians were killed.

A bomb explosion on Khayyam Avenue in Tehran killed 20 residents and left many injured.

November 1981: MKO detonated a bomb on Vali Asr Avenue in front of the Quds department store leading 4 people to their death.

December 1981: A suicide attack targeted Ayatollah Abdul-Hussein Dastgheib, a senior cleric in Shiraz and a number of other civilians.

– 25 Mhjahedin demonstrators set tires and a bus on fire and threw hand-grenades in Tehran-No St. in Tehran

– Around 70 Mhjahedin demonstrators set two buses on fire and threw hand-grenades that left 10 casualties in Vali-Asr St. in Tehran

– Around 60 Mhjahedin demonstrators threw Molotov at the banks and stores and exchanged fire guns in a clash with guards in Behnudi St. in Tehran

– Around 40 Mhjahedin demonstrators set tires on fire and threw Molotov in Sina St. in Tehran

– Around 40 Mhjahedin demonstrators fired guns at people and police forces in Behnudi St. in Tehran

– Around 100 Mhjahedin demonstrators set two buses and some tires on fire and threw Molotov at a gas station in Vali-Asr St. in Tehran

– 12 Mhjahedin demonstrators threw Molotov at a greengrocer in Behnudi St. in Tehran

– 27 September: Many armed Mhjahedin demonstrators set a few buses on fire and machine-gunned civilians killing and injuring them in downtown Tehran.

The civilians who were targets of MKO’s terrorist atrocities were of a variety of classes; teachers, merchants, drivers, workers and the like. Majority of them were targeted and attacked on charges of being a supporter of the Islamic Republic, having beard, and resisting against the perpetrators’ demands.