Terror In The Name Of Democracy: The Outset of a Phase of Violence

As the bankrupts of democracy, MKO began casting shadows of terrorism over Iran

The number of the word’s presidents and prime ministers assassinated since the mid-twentieth century reaches just about 50. Out of them, those assassinated by the use of the most violent and horrific methods, suicide or bomb blast, hardly outnumber a hand’s fingers. But the concurrent assassination of a president and his prime minister in a terrorist strike has a single record in its kind. And the untold about the event that may never repeat in the history is the key role of an ousted president as an accomplice to erase his successor. And the bare but shocking truth about the event is that almost all people being a high authority to investigate the complicated case or initiate prosecution for the terrorist offense turned to become the target and the victims of terrorism themselves. And it was just one of many shadows of terror that terrorists cast over Iran. 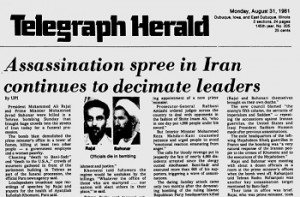 On August 30, 1981, a bomb explosion at a meeting of the National Security Council held at the Prime Minister’s office led to three immediate deaths: Mohammad Ali Rajai, the Iranian President, Mohammad Javad Bahonar, the Prime Minister, and Abdolhussein Daftarian, the prime ministry’s authority. Hushang Dastjerdi, the head of the national police, the fourth victim, passed away 6 days later as a result of the injuries. The terrorist plot, although incomparable with the preceding June 28 explosion quantitatively, the explosion in the Islamic Republic Party IRP killing at least 74 high-profile personalities, has its record as a bloody chapter in Iranian post-revolution history, a mysterious and complicated plot with many aspects still remaining ambiguous and many questions unanswered. 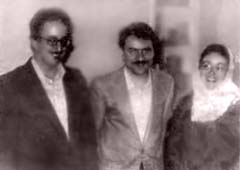 No doubt, the perpetrators of such ruthless, violent plots fail to provide the slightest justification for proven terrorist acts that are tantamount to a declaration of war against a nation. The responsible group, Mojahedin Khalq Organization (MKO/MEK/PMOI/NCR), after tolerating ultimate failures in winning public trust in two preceding presidential and parliament elections, had already started inventing pretexts to declare its war. In its military communiqué that implied a blatant declaration of a violent warfare against the Islamic Republic and was documented as a clear vindication of the group’s perpetrated terrorist crimes, MKO complained of misbehavior and “illegal and unlawful” undertaking against the still in office president, Abolhassan Bani-Sadr, whose conspiratorial collaboration with some opposition groups made the Iranian parliament to hold a debate on his presidency competence that finally led to his impeachment.

The president Bani-Sadr’s close connection and sympathy with a wide range of opposition groups, particularly his direct and strong support of MKO and giving the group a free hand in social and political affairs, as well as his incompetent function as the commander of the armed forces to confront the invaliding Saddam’s army made Ayatollah Khomeini to reclaim the power of Commander-in-Chief on 10 June 1981. Just 10 days later, Ali-Akbar Hashemi Rafsanjani, the Parliament Speaker at the time, apprised Ayatollah Khomeini of deputies’ decision about stripping Bani-Sadr of his presidential power. The response was clear; as the leader with the constitutional authority, Ayatollah Khomeini signed dismissal of Bani-Sadr.

In its first political-military issued communique No. 25 dated 17 June 1981, just three days prior to the first violent moves, MKO made references to events that motivated the organization to make a blatant decision to wage an armed warfare against the Islamic Republic:

“… At the same time, we are witnessing illegal arrests of the members of the presidential office whose names and the news of their arrests are not announced in some instances. Of course, they [the regime] are preparing a comprehensive plan of arresting progressive-seeking characters and antagonists of monopoly in the country. Mojahedin Khalq Organization, while protesting such unlawful and counterrevolutionary actions, thereby obtains permission from the hero Iranian people, and by the help of God, to adopt the most decisive revolutionary resistance through any possible means for the preservation of its members, especially those central cadres of the organization that are in fact considered a pivotal part of the people and revolution.”

On the evening of 20 June 1981, when the Parliament resumed its impeachment debate, MKO orchestrated a series of mass demonstrations that shook Tehran and some other Iranian provincial towns. Rioters had orders to carry small arms and cold weapons and soon the demonstrations turned into street battles that lasted more than three hours. The battles reportedly left heavy casualties and MKO rioters overturned buses and set the parked cars and motorcycles on fire. Although MKO’s plot to cause a widespread civil disturbance to lead the country into a serious civil war faced a total failure, the group adopted a different violent tactic since the day after.

Glorification of An Undemocratic Start