Terror In The Name Of Democracy: Initiation of Armed Revolt
The eruption of riots was actually MKO’s first organized armed revolt to steer the country to the verge of anarchy

The eruption of riots was actually MKO’s first organized armed revolt to steer the country to the verge of a chaotic atmosphere and anarchy and it was followed by daily scattered clashes, bombings and terrorist atrocities. The ousted Bani-Sadr himself used as the pretext to trigger MKO’s armed revolt, encouraged the group to precipitate the created crises by a wave of violent activities including assassination of high-ranking statesmen and personalities. In her confessions after her arrest, Sudabeh Sadifi, an adviser to Bani-Sadr, asserted that Bani-Sadr after his dismissal in a message to Massoud Rajavi, MKO’s leader, urged him to “Start striking their heads. There is no other way.” 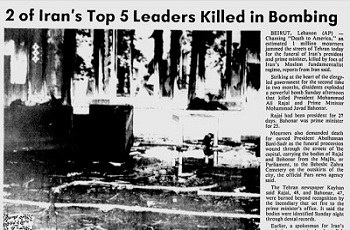 Plots to assassinate the key, influential heads in charge hatched just after Bani-Sadr and Rajavi’s hiding in the organization’s secret hideouts. The first perpetrated terrorist act was an attempt to assassinate Ayatollah Ali Khamenei, Tehran’s Friday prayers at the time, on 27 June, 1981; a bomb, concealed in a tape recorder, exploded beside him while he was delivering an address in Abu Dhar mosque south of Tehran. He escaped assassination but suffered serious injuries that left his right hand handicapped. The terrorist agent was identified to be a MKO’s central cadre, Javad Qadiri.

Tehran was still under the shock of the attempt assassination when MKO stroke the successive terrorist blow the day after on June 28. Reportedly, two blasts ripped through IRP building as the chief Ayatollah Beheshti was addressing his regular weekly meeting. The death toll rose to 74 including Ayatollah Beheshti, Cabinet ministers, deputy ministers and members of Parliament. The perpetrator was identified to be an infiltrated agent of MKO, Muhammad-Reza Kulahi. It was so heavy a strike for the newly formed regime and both MKO and Bani-Sadr expected complete destabilization and overthrow of the ruling authority. However, the public reaction to such violent, immoral deeds was nothing more than a strong feeling of repulsion towards MKO. 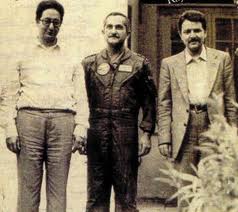 On July 27, 1981, Muhammad-Ali Rajai won a landslide victory in Iran’s second post-revolution presidential election. Deeply disappointed, the sole option before the two fugitives living in secret hideouts was to immediately leave the country. On 29 July, Bani-Sadr accompanied by Rajavi, in disguise and by having shaved off his customary mustache, were driven to a Tehran military base and got on board of a hijacked Iranian air force 707 jet tanker around 10 at night. It seemed unlikely that they could have gotten to the plane and aboard without the cooperation of other military personnel and particularly the pilot who flew the plane to land it at the military airfield of Evreux near Paris. The pilot, Col. Behzad Moesi, was the personal pilot of the ousted Muhammad-Reza Pahlavi whom, along with his family, he had flown out of Iran to Egypt and then to Morocco in December 1978. Unexpectedly, Moesi had returned Pahlavi’s plane, Shahin, to Iran and received a warm welcome as a hero and a revolutionary. He had succeeded to win the trust of authorities and had been appointed to sensitive military positions.

It is reasonable to assume that his return to Iran was a scenario outlined by the states antagonizing the Islamic regime and directed by intelligence agencies to establish a direct contact with the active opposition groups to arrive at an agreement for a variety of collaborative programs to advance political policies and interests inside Iran. And his return aroused nobody’s curiosity in Iran to question controversial aspects of such an easy return; how had he managed to refuel the plane and flew it out of a heavily guarded military base and pass over a few countries’ air borders to make a heroic return?

The fugitives’ escape to France postponed MKO’s second appalling terrorist operation scheduled to be perpetrated the month after the explosion at IRP building. Being granted political asylum just after his arrival in France, Bani-Sadr said “we must try to find a quicker way of overthrowing the absolutists”, and Rajavi vowed to “organize the resistance” against the Islamic Republic from France. There they were granted the opportunity of conveniently planning, by abundantly offered external aids, for more destructive and successful operations. The quick way to success had to be involved a variety of violent options including suicide bombing; MKO had enough devoted infiltrated agents as volunteers for these types of operation. Massoud Keshmiri, the agent who detonated the bomb in the Prime Minister’s office, had already volunteered to be a suicide bomber if necessary although he succeeded in his mission without endangering his life and managed to escape through a well-planned trick played by his fellow-mate accomplices.
On August 30, 1981, Mohammad Ali Rajai, the Iranian President, and Mohammad Javad Bahonar, the Prime Minister, were burned beyond recognition by an incendiary that set fire to the Prime Minister’s office. The victims’ bodies were identified only through dental records. No group immediately claimed responsibility for the bombing but there was speculation, proved later, that it was work of MKO. There still remains questions concerning the planted incendiary bomb that just burned the president and his prime minister but leaving others merely injured. The third victim, Abdolhussein Daftarian, the prime ministry’s authority, died of uncontrolled consequences of the blast. The fourth victim, Hushang Dastjerdi, the head of the national police, passed away 6 days later in hospital as a result of the injuries. The bomb was said to have been planted inside a briefcase that Keshmiri carried, but there was a different judgment that it had been planted inside a tape-recorder stationed before the victims. Col. Muhammad Mahdi Katibe, a member of the meeting who survived the blast, states that:
“I believe the appropriate container to plant the bomb inside was the tap-recorder that had a capacity for more than 10 pounds explosives. I think it was a hollow case inside which they had planted a TNT time bomb with alarm clock detonator. I doubt if there was a better vessel.”

Glorification of An Undemocratic Start