The French diplomatic genius Charles Maurice de Talleyrand once said: "It was worse than a crime; it was a mistake." This is perhaps the best way to describe the US State Department’s 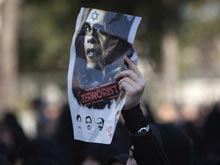 recent decision to take the Mujahadeen-e-Khalq (MEK) off its notorious list of 52 foreign terrorist organizations. It was yet another setback in the negotiations between Iran and the West on the former’s nuclear program.

It is one of those cynical moves that will only exacerbate an already unfavorable diplomatic atmosphere, suffering from a dearth of goodwill and mutual trust. Iran and the US are already stuck in a dangerous game of chicken: Washington is pressing its advantage by increasingly tightening the noose around Iran’s economy, while Tehran is relentlessly pushing the boundaries of its nuclear-enrichment capabilities toward a fait accompli. Both sides are in essence locked in a precarious form of brinkmanship, bringing the world closer to a devastating confrontation. The Persian Gulf has been witnessing increased military tensions in recent months, with both the US and Iran fortifying their military presence and stepping up their military activities.

Meanwhile, sanctions have been biting into Iran’s increasingly vulnerable economy, embittering the Iranian population toward the West, especially the US. Instead of reaching out to the Iranian people, as he repeatedly promised, US President Barack Obama is not only imposing what can be termed in international law as collective punishment, but also accommodating an organization that most Iranians identify with treachery and deceit.

Obviously, the current deadlock could only be broken through sustained and meaningful diplomacy. However, diplomatic efforts have been in a protracted state of hiatus, with the Iranians postponing any major agreement until the US overcomes its cyclical diplomatic handicap – the inability to make a decisive and lasting concession until the conclusion of the presidential election.

The MEK decision is also a classic example of how domestic politics can derail high-stake diplomacy, with the fate of international security hanging in the balance. To secure his re-election bid, President Obama is trying hard to look tough on Iran. But what Obama ignores is how his short-term political calculations may carry long-term risks vis-a-vis the Iranian nuclear issue.

An ambivalent decision
The delisting of the MEK came ahead of a court-ordered October deadline, with US Secretary of State Hillary Rodham Clinton sending a classified document to Congress earlier, detailing her department’s position on the matter.

In 1997, the State Department placed the MEK on its Foreign Terrorist Organizations List for its history of terrorist activities, especially against US citizens in the 1970s. However, ironically, Washington protected the MEK members in Iraq’s Camp Ashraf after toppling Saddam Hussein, the organization’s main patron. Later, when the group came under increasing pressure – ahead of US troop withdrawal – by the Tehran-backed government in Baghdad, Washington opposed any violent crackdown on the camp, while exploring means to transfer MEK members elsewhere. Finally, amid a logistical headache and rising political noise, Washington transferred some of the 3,000-strong MEK militia to Camp Liberty, a former US military base near Baghdad International Airport.

The State Department justified its delisting of the MEK on the grounds that the organization has publicly renounced violence, cooperated in the closure of Camp Ashraf, and has shunned terrorism for more than a decade.

Crucially, the move came in the midst of continuous vilification of Iran as an imminent nuclear threat that should be met with force, a narrative enthusiastically espoused by a wide spectrum ranging from hawkish Republicans in the US Congress to pundits in the mainstream media as well as Israeli Prime Minister Benjamin Netanyahu (and his powerful friends in the Israel lobby in the US). Netanyahu has already called for an explicit "red line" against Iran’s nuclear program, coaxing Washington to place the military option squarely on the table.

However, it is not clear whether Washington actually sees the MEK as a possible asset and a viable ally in the event of direct confrontation with Iran as the window for a diplomatic compromise rapidly narrows. The delisting was perhaps just an effort to annoy Tehran or, more important, to appease the anti-Iran establishment amid the current US presidential election campaign.

For its proponents, the recent move was just a logical extension of a broader Western accommodation of an organization that claims to represent the "legitimate democratic opposition" in Iran. Britain delisted the MEK back in 2008 and the European Union a year later. The group has significant presence in such places as Paris, which hosts its headquarters, and has staged major rallies in the French capital.

Maryam Rajavi, the organization’s Paris-based leader, welcomed the US move by stating: "This has been the correct decision, albeit long overdue, in order to remove a major obstacle in the path of the Iranian people’s efforts for democracy."

Anti-Iran hawks in the US hardly held back their enthusiasm. Republican Representative Dana Rohrabacher expressed his joy with the decision, because he believes "the MEK are Iranians who desire a secular, peaceful and democratic government", while Ted Poe, Republican member of the House of Representatives Foreign Affairs Committee, described the decision as "long overdue".

The decision is a culmination of years of lavish and aggressive lobbying by the MEK – boosted by growing support from rich Iranian-American exiles opposed to the regime in Tehran – directed at (current and former) top US officials and leaders from both the Democratic and Republican camps.

The MEK spent US$1.5 million alone to hire three leading Washington lobby firms. It channeled millions of dollars in "speaking fees" to sympathetic American officials and leaders who graced the MEK’s high-profile events, rallies and campaign gatherings calling for the State Department to delist the organization.

The list of top-notch supporters is astonishing. The former Democratic governor of Pennsylvania, Ed Rendell, has been among the group’s biggest beneficiaries, reportedly receiving up to $150,000 in speaking fees. For the Republican chairwoman of the House Committee on Foreign Affairs, Ileana Ros-Lehtinen, the figure stands at around $20,000. Former presidential candidates from both the Republican and Democratic parties, namely Bill Richardson, Howard Dean and Rudolf Giuliani, have also joined the fray.

What is clear is that the Obama administration has found it increasingly difficult to ignore an organization that has astutely exploited growing cynicism against Iran, staged numerous rallies and vigils outside the State Department, organized huge sit-ins in congressional hearings, and rallied the support of leading US figures. The administration has finally succumbed to the pressure. But this domestic concession could carry significant costs in the broader multilateral efforts to resolve the Iranian nuclear conundrum.

Potential diplomatic fallout
In the initial years of the Islamic Revolution, its supporters had to contend with the MEK, an organization founded on an eclectic Marxist-Islamist-nationalist ideology, as a major rival in determining the fate of the new Islamic Republic. After all, during the 1979 revolution, the MEK was among the major players within the broad coalition of forces that deposed the Shah. After a series of violent confrontations in the immediate post-revolutionary years, a severely weakened MEK lost whatever measure of popular legitimacy it enjoyed when it sided with Saddam Hussein against Iran during the eight-year "imposed war" (Jang-e-Tahmili).

After its expulsion from Iran, much of its paramilitary capability was concentrated in Iraq, under the generous sponsorship of the Baathist regime. So it practically lost any significant presence within Iran. The MEK is an organization with few to no roots within Iran’s political landscape, so it is not clear how it could play a critical role in changing that landscape and/or Tehran’s nuclear posture to America’s advantage. This is precisely why successive US administrations have instead reached out to reformist elements within Iran, never seeing the MEK as a viable ally.

It must be noted that Washington’s 1997 decision to include the MEK in the list of terrorist organizations was part of its nascent diplomatic outreach to the newly empowered reformist government in Tehran under president Mohammad Khatami. After all, inclusion of groups in the Foreign Terrorist Organization list has been generally arbitrary, simply tuned to America’s short-term strategic interests.

In recent years the Obama administration, at least rhetorically, sided with Iran’s so-called Green Movement – a loose network of forces composed of certain reformist leaders and disenchanted sections of the society – that formed the backbone of post-election protests in 2009. However, there have never been institutionalized channels of communication between Washington and Iran’s leading reformists. So it seems that accommodating the MEK is somehow a desperate effort to build ties with alternative Iranian elements explicitly opposed to the regime.

Yet there may have been even more concrete reasons. Reports suggesting increased intelligence and security cooperation between the MEK on the one hand and Israeli and US agencies on the other in recent years provide the strongest hint behind Washington’s decision to delist the group.

In 2002, an MEK-affiliate group, the National Council of Resistance in Iran, revealed a laptop containing confidential information about Iran’s burgeoning enrichment activities in Natanz and Arak. Since the MEK does not possess an independent and credible intelligence-gathering capacity, it is widely believed that Israeli intelligence agencies were behind the leaked documents. The revelation marked the beginning of a decade of tense nuclear negotiations between Iran and world powers, which precipitated a severe set of sanctions and repeated threats of military intervention against Tehran.

In April this year, leading investigative journalist Seymour Hersh reported that back in 2005, the Nevada-based Joint Special Operations Command trained "Iranians associated with the MEK" as part of the George W Bush administration’s broader "global war on terror". Commentators have also suggested that various Western intelligence agencies, especially Israel’s Mossad, have been working closely with the MEK in a "shadow war" ranging from sabotage against Iran’s key military and oil facilities to the assassination of Iranian nuclear scientists and sabotage of nuclear installations.

Understandably, the Iranian authorities immediately lashed out against Washington’s decision to delist one of its most long-standing nemeses. Iran holds the MEK responsible for at least 12,000 deaths, including high-profile members of the regime in the early years of the revolution. Iranian state television accused the US of double standards by supporting "good terrorists" who serve its interests by working against Iran and its nuclear program. The Iranian Foreign Ministry warned that the decision would put on the US "responsibility for past, present and future terrorist operations by this group", just as Rajavi expressed her hopes that the delisting "will lead to the expansion of anti-regime activities within Iran".

Negotiations on the nuclear program are already in bad shape. Despite repeated overtures by Tehran – from decreasing enrichment activities to the 3-5% territory, to shipping out its stockpile of high-enriched uranium, and opening up of its whole nuclear infrastructure for inspection – to resolve the standoff, the Obama administration has repeatedly refused to meet Iran’s two basic demands: (1) An unequivocal recognition of Iran’s enrichment rights under the Non-Proliferation Treaty (NPT); and (2) reversal of unilateral sanctions battering Iran’s entire economy.

Obama’s accommodation of the MEK will further undermine its nuclear diplomacy toward Iran. It will do nothing but strengthen the hands of Iranian hardliners – at the expense of pro-diplomacy pragmatists – who have called for a withdrawal from the NPT, an increase of enrichment levels to 60%, and preparations for a military confrontation with the West.

Beyond regime insiders, the Obama administration has also alienated ordinary Iranians and opposition elements who detest the MEK and view the latest move as another cynical ploy to retard Iran’s scientific progress and bring the country to its knees.

Richard Javad Heydarian is a Manila-based foreign-affairs analyst. He has reported for or been quoted in The Diplomat, UPI, Foreign Policy, Tehran Times, Russia Today and Foreign Policy In Focus, among others.