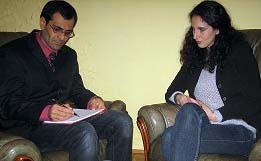 Mr. Abbasslou: Dear Ms. Shemeltz, as a person who is familiar with the cults and their functions, do you think we should feel pity for Mr. Rajavi?

Ms. Shemeltz: personally, I really feel pity for such a person, I’m so sorry for him.

Mr. Abbasslou : Ms. Shemeltz, I got shocked by your answer. Do you really feel pity for a criminal?

Ms. Shemeltz: yes, it is with a great sorrow that an individual has to commit so many criminal acts in order to please himself and to survive. Yes, I feel pity for Mr. Rajavi and also for his victims.

What makes me upset is that a human being has such capacities and there is no mechanism or practical solution to control him. In the world of business many people like that such individuals exit. Individuals like Massoud Rajavi bring benefits to many and are considered as a source of making a living and achieving benefits.

Mr. Ababsslou: dear Ms. Shemeltz, I couldn’t get what you exactly mean! Do you mean than MR. Rajavi suffers from his victims’ sufferings?

Ms. Shemeltz: Mr. Rajavi is a miserable person. He cannot see others’ sufferings because his own sufferings are more than anyone else. He is deeply drowned in his tormenting world. He views himself a sun that gives life to the earth. He views himself the centre of the world.

Mr. Rajavi has had a good picture in the mirror of the society. He definitely has been a charismatic personality for his followers who have not simply diagnosed his psychotic desease. I guess that so far no one has seriously and deeply investigated or analyzed Mr. Rajavi’s mental problem.

First of all, we should know Mr. Rajavi to know the cult under his control. Understanding people like Mr. Rajavi is a complicated task requiring detailed scientific research and studies. As I said none of the above mentioned theories are precisely right; they are just theories. To suggest an exact argument about Mr. Rajavi, He should be monitored in a treatment center under our control. I wish I could talk to him. I wish he would write his opinions if he read the interview.

Mr. Rajavi is able to move other’s feelings. He can manipulate their feelings and emotions taking them out of normal condition and make them decide and move in favor of his own goals and ideas.