written by Defectors of Mujahedin-e-Khalq Organization May 30, 2013

First of all I should congratulate the prisoners [held in the MKO] and their families on the departure of the first group of hostages held in Iraq to Albania. 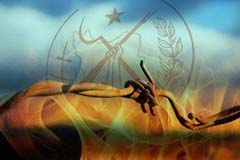 It is known to everyone that heavy efforts were made by the UN and other international bodies as well as enduring families of the residents – who tolerated the cold and heat in Iraq– and also former members of the MKO. The negotiations between UN, Iraqi government and third countries to convince other states of the world to accept captives of the MKO resulted in the departure of 14 people. Besides, the interviews and illuminating posts by former members helped neutralize the tactics of the MKO leaders who intended to impose their forceful stay on Iraqi people and government so that they could take advantage of their stay in Iraq and by gradually making our friends be killed in their camps they could run their propaganda.

It was long ago that Albanian Government offered to accept 210 Liberty residents. If the group leaders had agreed with offer immediately, other residents of the camp would have been relieved about their departure and the relocation process would have been accelerated. Quite the reverse, the MKO leaders urged on their stay in Iraq and put accusations on special Representative of the UN Secretary General, Martin Kobler and even his wife [German ambassador in Iraq] in their efforts to prolong and stabilize to their stay in Iraq; Massoud Rajavi even declared the departure from Iraq as taboo. His funny sentence did not only include the departure from Iraq but also boycotted departure from the organization.

Anyway, the Taboo of leaving the MKO has been broken. A number of the members could reach the outside world where they can see the wonders of the world they had been deprived from for about three decades. The vital thing about these people is that they should never let the MKO dominate them and exploit them again. They should decide for their future with their own free will not under the will of the MKO leaders who left them in the deserts of Iraq and fled to Europe to enjoy the best life and comfort there.

Certainly, the gradual departure of the MKO members from Iraq is the start of the group collapse. We should wait and see what’s coming.