Baghdad, 30 May 2013 – On 29 May, the Special Representative of the United Nations Secretary-General for 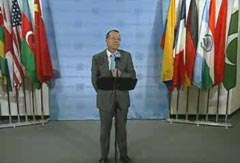 In his exchange of views with the parliamentarians, Mr. Kobler expressed serious concerns over the heightened level of violence in Iraq and the danger that the country falls back into sectarian strife, if decisive action is not taken by its political leaders. “The country stands at a crossroads,” the UN Envoy said, calling for a stronger EU role in dealing with the developments unfolding in the country, and for increased interaction with the Iraqi Council of Representatives.

Mr. Kobler also briefed AFET on UNAMI’s efforts to resettle the former residents of Camp Ashraf to third countries. He deplored the lack of cooperation of the residents and of their leadership with the UNHCR and UN monitors, and urged them to accept concrete resettlement offers. Stressing that “resettlement to safe countries is the only durable option”, he called again on European Union member states to accept former Camp Ashraf residents into their countries.

Open letter of “Azadi Associaition”, the survivors in...

Nejat Society’s letter to the UN office in...

Letter of SFF to the UN High Commissioner...