From early morning on Sunday 1st September, the National Council of Resistance of Iran (NCRI), the western 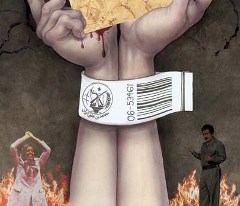 shop front of the Rajavi cult in Paris, started issuing statements one after another claiming that armed Iraqi forces had carried out an attack, killing some of the remaining people in Camp Ashraf while they have been handcuffed. international media started broadcasting this news and a flood of condemnation and sympathy resulted. It is unfortunate that the original source of this news has been the Mojahedin Khalq (aka MKO, MEK, NCRI), the dangerous, destructive Rajavi cult. The Mojahedin Khalq also distributed pictures which have also been broadcast worldwide, eliciting even more sympathy from various quarters. The speed at which this self-reporting was carried out and the wide circles to which it was distributed clearly shows some amount of readiness in this respect.

The Iraqi government denied any military involvement in Camp Ashraf, and various Iraqi officials condemned this attack no matter how and by whom it was carried out. They have all asked for the intervention of the United Nations and a thorough investigation into this issue. But apparently the Rajavi cult’s side of the story was a more desirable and acceptable one for the western media. Among these western media, the Associated Press coverage is most interesting as it reports on the contradictions among the statements by different Iraqi authorities. When you read the report, it is obvious that all the officials interviewed who have been named by AP have condemned the attack and have asked for international organisations to intervene. But an “unnamed” local police officer has apparently claimed that the Iraqi forces were involved! Later on we find that the so-called “unnamed local police officer” is of course the Rajavi cult itself which has pushed this claim through their connections and friends inside the Associated Press.

We have recently written about Massoud Rajavi answering the question “when will the regime be toppled?” by saying “I am only in charge of your Day of Judgment and no one knows the date of the collapse of the regime”. We put this reply to an expert on Iraq and the Mojahedin Khalq and asked for his opinion. His analytical reply on September 24, 2013 (by emails which can be made available) was that:

“If true, and if he (Rajavi) wants to reduce the [MEK’s] activities, discontinue the [group’s] current situation and give up political activities to retire and attend to his personal life, then he will have two essential needs. One is that he has to somehow convince the United States to sort him out and keep him safe somewhere in Europe and the second need is to get rid of these 3000+ people (in Iraq). As far as I know Rajavi, he is probably planning to expend the lives of these 3000 people for the American secret services to somehow push forward the American agenda in Iraq with their lives; for example chemicals, bombing, poison or similar activities. At the end of the day he would need to get rid of them for good and blame the Iraqi government so that the Iraqi government would be forced to offer some kind of compensation to the Americans and in return the Americans would accept to give him, Rajavi, a place in Europe where he can be kept pickled for a day when he may be useful again”.

Since responsibility for Camp Ashraf was transferred from the American forces to the Iraqis, the Mojahedin Khalq’s line of action has consistently been to engage in violence with whatever means possible face to face with the Iraqi forces in charge of the security of the camp. The Iraqi government has for years tried to pursue the peaceful transfer of this destructive cult from the country with the utmost care and patience. The transfer of Rajavi’s forces from Camp Ashraf to Camp Liberty, a transit camp, only started after the intervention of the United Nations and Hilary Clinton, then US Secretary of State, who at that time promised the MEK that if they accepted to be transferred peacefully, the United States would remove them from its list of terrorist groups. This was the first step toward transferring them to 3rd countries according to the agreements drawn up between the UN, the Iraqi Government and the MEK. But Rajavi, acting against all that he had accepted, kept some of the forces in Camp Ashraf with the excuse that they should remain to sell any MEK belongings which remained in the camp. At the same time Rajavi every day rejected all and every proposition from potential buyers and then started demanding that his forces be brought back from the transit camp to Camp Ashraf. It is noteworthy that this camp was originally call “Khalis Garrison” and belonged to the Iraqi army under Saddam Hussein, who had illegally given it to Rajavi who later on forcefully confiscated the agricultural lands adjacent to the camp and added them to the garrison.

The Iraqi government has tried to resolve the problem of Camp Ashraf peacefully and according to the agreements made and according to court judgements which specify that the land of the garrison should repossessed, but the leaders of cult have prevented Iraqi officials from entering the camp and declared it to be their property in spite of the court rulings. It is worth mentioning that Camp Ashraf is the only place in Iraq that after 10 years still belongs to Saddam Hussein and has not been entered and investigated and is not under the control of the Iraqi government. It is also worth mentioning that Rajavi has forbidden his forces from using the words “transit” and/or “3rd countries” even though these were part of his own agreement with the UN and its representative Martin Kobler. Rajavi later accused Mr Kobler of being an agent of the Iranian regime.

As the negotiations between the Iraqi government and the leaders of the Mojahedin Khalq were continuing, we at Sahar Family Foundation warned repeatedly that many people have been affected by the crimes committed by this cult, that many people have lost their land and many have lost families and children and are after revenge. We have repeatedly emphasised that Iraq is not a safe place for the members of this cult and they should be cooperating with the United Nations to be taken out of Iraq. Rajavi knows all this but deliberately wanted to keep them in Iraq and especially in Camp Ashraf, which is of course much more unsafe than Camp Liberty. He needed their blood.

The Mojahedin Khalq leaders have repeatedly emphasized that in order to keep Camp Ashraf they need blood. In the April 8, 2011 incident, when Iraqi forces entered the north part of the camp, the leaders had told the members that they should not worry or be afraid and they should go forward and attack the soldiers with whatever they could because the army had not brought any live bullets with them and the bullets they do use are blanks. They deliberately wanted the number of casualties to increase. Survivors of the cult can testify that the leaders of Mojahedin Khalq constantly emphasize that they need blood and constantly encouraged members to create conflict.

What should we expect from a cult and its leader who deliberately sends his follower to their deaths, looks upon them as disposable soldiers, gives them orders to burn themselves and sends them to war without training and arms? In July 17th 2003 when they gave the order for self-immolations , they had promised the victims that they would intervene and extinguish the fire once it was started. But they didn’t, they stood aside and took films. According to many who have managed to escape the cult, they killed many of their own disaffected members by shooting them from the back and then registered them as martyrs from during the bombardment of the coalition forces.

Pictures of this latest incident distributed by the Rajavi cult show how the residents have been handcuffed from behind and then murdered. If it was the Iraqi government, would it not make sense that they would finish it all and not leave someone to take pictures to send to the H.Q. of the cult so that they would broadcast it within such a short time all over the world? Is it not the case that the picture taking and other facilities were prepared in advance?

The reasons behind this can be deduced from recent events in Iraq’s political situation and the Iraqi government’s stand in front of the Americans’ aggressive policies in Syria. That the Mojahedin Khalq leaders kill the members is not a new phenomenon. Killing disaffected members and adding them to the list of martyrs is not new.

The Iraqi government had notified the Rajavi cult that they are running out of patience and will have to take back the camp but Rajavi has acted in advance and this massacre is with no doubt his work and the work of those on his payroll. To place the Iraqi government under international pressure was a favour to the Americans and he also now has fresh new blood to feed his propaganda machine.

If Rajavi dies and comes back to this world a thousand times, it is not enough to pay back what he has done. The first victims of any cult are its own members; individuals who have wasted the last 3 decades of their lives for Massoud Rajavi now have become the victims of a joint cultish and imperialistic game.

We again ask all international organisations to intervene to save the lives of the hostages taken by Rajavi and prevent more bloodshed in future.