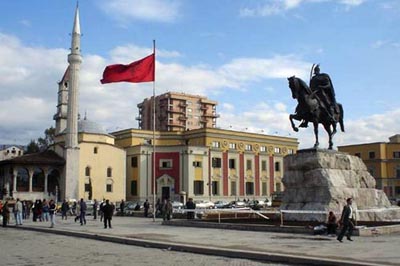 Your honourable and distinguished government, within the framework of human rights actions and activities, has accepted and given refuge to 210 members of the PMOI (People’s Mojahedin Organization of Iran), who are captives in Iraq. But, the Mojahedin Organization has taken advantage of this opportunity and has placed some of its commanders among the ordinary PMOI members who have been sent to Albania, in order to supervise and control them.

Some of these, who are the PMOI’s high ranking officers and commanders, are in Albania right now such as Farzaneh Meydanshahi (member of the PMOI Leadership Council), Esmail Mortezaie, Houshang Doodkani, Afshin Ebrahimi and Karim Ghorayshi.

These PMOI commanders and operatives who have come to Albania, have failed to control and supervise the ordinary members and, as a result, 70 individuals have separated from the PMOI in Albania and have declared that they do not want to co-operate with the PMOI any more. In spite of their public declaration, they have been under severe pressure from the PMOI operatives and commanders in Albania.

According to authenticated news from inside the PMOI, the PMOI leadership have decided to send Mrs Masoumeh Malekmohammadi, who is one of the PMOI high ranking officers and commanders, to Albania to reinforce the Mojahedin organization there. She is one of the PMOI’s most important and notorious figures.

The PMOI’s most important objective in sending her to Albania is to rescue her from judicial indictment and prosecution in Iraq. Mrs Masoumeh Malekmohammadi is one of the PMOI’s high ranking officers whose name has been listed by Iraq’s judicial ministry for crimes committed in Iraq.

She was head of the PMOI’s External Affairs department in Iraq which implemented the meetings and transactions with Saddam Hussein’s government. She has had other responsibilities in Iraq which are as follows:

Implementation of projects to intervene in Iraqi affairs during the last 10 years; endeavours to create schisms and chaos in Iraq’s internal affairs; creating artificial associations and parties in the name of Iraqis and supporting specific terrorist groups in Iraq; supporting the terrorist group of Taregh Al-Hashemi, the former deputy president of Iraq, who is now a fugitive.

Among the terrorist activities committed by Masoumeh Malikmohammadi was her participation as a high ranking commander in the massacre of the Kurdish population in the area of Khaneghin in the Pearl military operation (aka Morvarid operation) in 1991 in Iraq.

In 1995, she was one of the high ranking PMOI operatives and commanders responsible for suppressing and torturing the dissident members in the prisons of Camp Ashraf. She tortured and interrogated many of those dissident members in those prisons in Camp Ashraf and stood as one of the judges in those extra-judicial courts which were created by the PMOI leader Massoud Rajavi to prosecute and sentence these dissidents. Her name is also mentioned as one of the officials and operatives linked to suspicious and questionable deaths inside the PMOI. During her residence in Pakistan between 1995-1996 Mrs Malekmohammadi was under judicial indictment and prosecution by the government of Pakistan because of her unlawful activities there and as a result of that she escaped from Pakistan to Iraq using a fake Iraqi name and passport.

We urge you as the Interior Minister who is responsible for the security of Albania, according to the above mentioned facts, to prevent the entrance of Mrs Masoumeh Malekmohammadi to Albania. She should be handed over to the Iraqi courts of justice for her criminal activities in Iraq.

We urge you and your government to allocate and designate a place for the separated members of the PMOI away from those who are loyal Mojahedin members in Albania in order for them to be safe and sound from the psychological tortures and pressures of the PMOI.

We are very thankful and grateful to you and your government for your humanitarian measures and hospitality.

The Iranian people will not forget your great and humanitarian act of harbouring their children in Albania.

Some of the former PMOI members and critics of the PMOI:

Office of the Prime Minister of Albania

Office of the Prime Minister of Iraq

Office of the Minister for Internal Affairs of Albania

Office of the Minister of Justice of Iraq